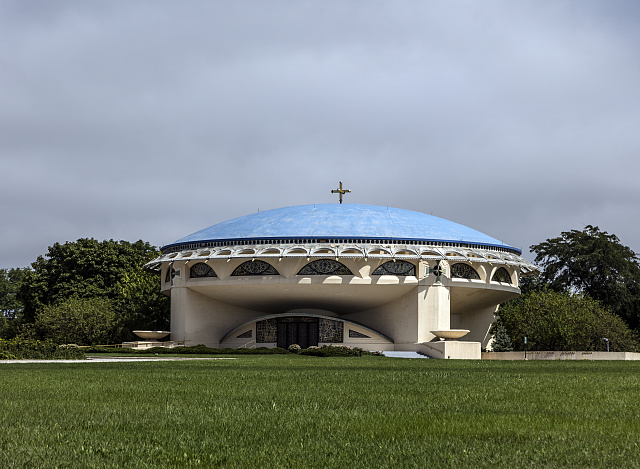 Greek immigrants began arriving in Milwaukee in significant numbers in the early 1900s. Other ethnicities were larger in number, but the Greeks quickly made their mark on the city forming businesses such as confectioneries, restaurants, and taverns. Some worked in tanneries and breweries; others built railroads and bridges.[1]

These Greeks brought with them the faith of their homeland—Orthodox Christianity. The new Americans quickly formed what is now Annunciation Greek Orthodox Church, meeting to worship in storefronts and other rented spaces.[2] In 1914 fewer than 500 congregants achieved the dream of building the original Annunciation Church at the corner of Broadway and Knapp.[3] A historical plaque now marks that location. Annunciation was among the first ten Greek Orthodox parishes in the country.[4]

After years at its original location, the congregation began thinking seriously about a new, bigger edifice. Church lay leaders—many of whom were now highly educated, successful businessmen—mounted the effort to select a site, choose an architect, and build the church building they dreamed of.[5]

By the late 1950s, a site at the corner of 92nd Street and Congress was chosen.[6] And—amazingly—the renowned architect Frank Lloyd Wright was commissioned to design the building.[7] Inspired by the Hagia Sophia in Constantinople (Church of Holy Wisdom), and also by his wife, a Russian Orthodox, he designed a distinctly modern, non-traditional church building filled with symbolism. The church’s dome—an overarching ceiling and roofline—is the distinctive characteristic of the building.[8] 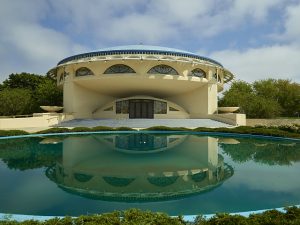