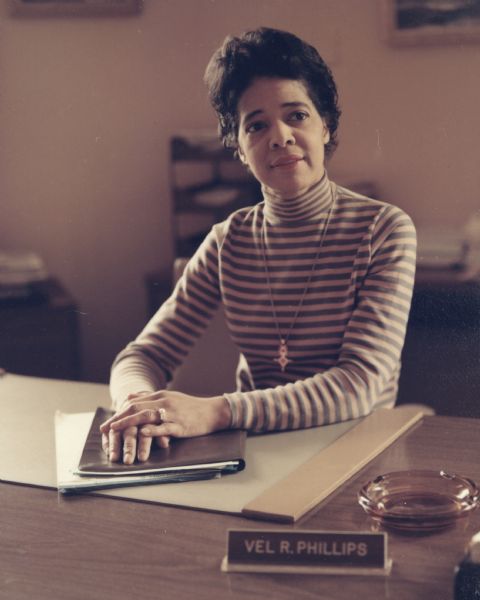 Vel Phillips (1924-2018), Milwaukee’s first alderwoman and the first African American on its Common Council, was born Velvalea Rodgers on the South Side of Milwaukee. While she was a child, her family moved to Bronzeville, where she later established her political career.[1] She graduated from Howard University in 1946, returned to Wisconsin to attend law school in Madison,[2] and became the first African American alumna of the University of Wisconsin Law School.[3] There she met and married fellow student and her future campaign strategist W. Dale Phillips.[4] They returned to Milwaukee, opened a Bronzeville law firm, became active in the NAACP, and launched her political career in 1952 by announcing a bid to be the first African American on the city’s school board.[5] She lost in 1953 but worked in League of Women Voters’ registration drives, networking for her next political run,[6] pending redistricting after the census. The increase in Milwaukee’s African American population added an aldermanic seat with no incumbent. In 1955 Phillips announced her candidacy.[7] She won her Common Council seat in 1956. She served on the Council until 1971. She and her husband Dale raised two sons, the first born shortly after she won her first council election.[8]

Milwaukee major media focused more on gender than race[9] in coverage of her campaign and early career. She met both sexism and racism from aldermen[10] but bided her time in her first terms to build support beyond the city. In 1958, again using women’s networks, Phillips addressed thousands of Democratic women in the capital[11] and won a state committeewoman post, the first African American elected to the party’s national committee.[12] Democrats needed women voters,[13] the “Negro vote,”[14] and Wisconsin. With the first presidential primary in 1960, the Democratic party named her to the platform committee and as rules committee co-chair, the first minority to lead a standing committee.[15] Her early support for and campaigning with John F. Kennedy[16] were considered crucial in his first primary win, in Wisconsin, on the way to the White House.[17] She returned to City Hall and to her civil rights agenda for the city, she repeatedly introduced a proposal for open housing that other aldermen repeatedly rejected. From 1961 forward, Phillips participated in state Capitol sit-ins and local marches for her law,[18] later joined by Father James Groppi.[19] In 1967, their arrests[20] caused national media to call Milwaukee “the Selma of the North,”[21] one of few major cities without an open housing ordinance, owing to obduracy by Mayor Henry W. Maier. He called her into his office to give her a “hard time” and called for her husband to give her “a whipping.”[22] In 1968, after passage of a federal open housing law, he finally acceded to her local law.[23]

By 1970 she no longer was the lone minority member of the Common Council,[24] though the council reverted to all-male status in 1971, when Phillips was appointed the first African American in the state judiciary and Milwaukee County’s first woman judge.[25] She lost a 1972 election to retain her seat on the bench[26] but remained active in antiwar and women’s movements,[27] returned to run for Secretary of State in 1978, and became the nation’s first African American woman elected statewide to executive office. As Wisconsin Secretary of State from 1979 to 1983[28]—and acting governor “for a few days” in the governor’s and lieutenant governor’s absence, “until the men found out and hurried back”[29]—she lost party favor and retired from politics. Nonetheless, she remained, in her nineties, an NAACP officer, local activist for civil rights, and inspiration for younger generations of women and minority political aspirants.[30] She died on April 17, 2018, almost exactly fifty years after the passage of the Milwaukee law she championed.[31]