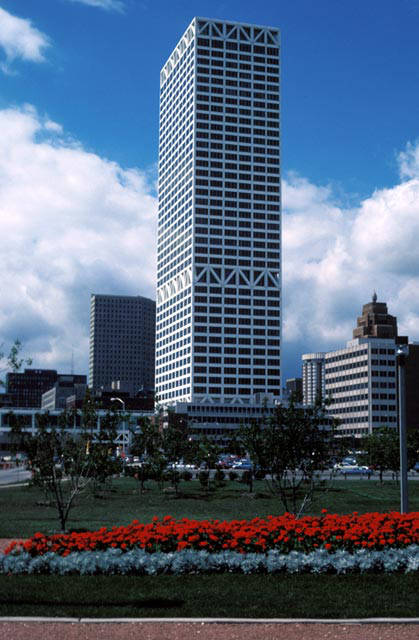 The US Bank Center was constructed as the home of the First Wisconsin National Bank.[1] In 1969 the company unveiled plans to move from its headquarters at 735 N. Water Street to a new downtown headquarters building at 777 E. Wisconsin Avenue.[2] When finished in 1973, the surpassed Milwaukee’s City Hall[3] as the tallest in Wisconsin. A sequence of corporate mergers in the late 1980s prompted both the company and the building to change names several times. In 2002, the building assumed its present name, the US Bank Center.[4] Though the bank’s headquarters have moved to Minneapolis,[5] the building remains a potent symbol of Milwaukee’s banking history.

A formidable structure, the building rises 42 stories to a height of 601 feet (with another five basement levels) and provides nearly 1,300,000 square feet of retail and office space.[6] The unadorned rectangular structure was built in the international style, primarily with steel and aluminum.[7] The exterior, comprised of over 5,000 windows, is two-thirds glass.[8] Skyways connect the building to the adjacent Lewis Center and Juneau Square North buildings.[9]

Collaborating with the local Fitzhugh Scott Architects,[10] the Chicago-based Skidmore, Owings & Merrill LLP Architects[11] headed construction and design. The building was designed by Bruce J. Graham[12] and engineered by Fazlur Khan.[13] Best known for Chicago’s Willis (Sears) Tower and the John Hancock Building,[14] Graham and Khan were pioneers of the trussed-tube architectural style.[15] This style, combined with the building’s height, makes the US Bank Center distinctive in Milwaukee’s skyline. Bands of diagonal trusses, approximately 1/3 of the way from the bottom, and along the top are both structurally and aesthetically functional.[16] Construction began in 1971 and took two years to complete.[17] Two workers were killed and several others injured in a series of construction accidents.[18]

In 1988, First Wisconsin changed its name to Firstar Corporation; and in 1999 they installed four large Firstar signs around the top of the building. Many Milwaukeeans criticized the enormous green signs for damaging the building’s aesthetic integrity and turning it into a corporate billboard. Bank spokespeople defended the decision, however, as an effort to reinforce identification with the relatively new Firstar brand.[19] Despite the critics, the signs remained; they were replaced in 2002 with signs advertising the building’s new owner, US Bank.[20]

The building’s managers have endeavored to make it a community- and environmentally-friendly space. The building periodically opens for charity events and is implementing energy-efficient and waste-reducing methods of operating.[21] In 1987 the building dedicated a section of its roof as a nesting ground to help rehabilitate Wisconsin’s Peregrine Falcon population. The program continued beyond its original 5-year plan; by 2011, 66 peregrines had hatched atop the building.

Climbing the US Bank Center 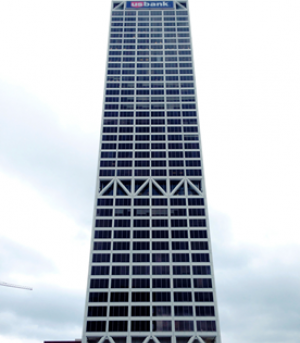 The StairMaster did not prepare me for this! My legs feel like they’re made of lead, my lungs are burning, and my heart is pounding harder than I knew it could. “12 more floors,” I manage to wheeze in the general vicinity of a friend I somehow convinced to partake in the American Lung Association’s Fight for Air stair climb at the U.S. Bank Center. And so we found ourselves, on a Saturday morning and of our own free will, having run up 35 floors of the U.S. Bank Center, with 12 torturous flights to go.[1] When we staggered to the top a few minutes later we were greeted with a medal, a water bottle, and the best view of Milwaukee either of us had ever seen. We took our time making a slow lap around the observation deck, pointing out where we grew up, where we lived now, and various city landmarks. We stood for a while, just wiping away the windows’ condensation and soaking in the enormity of Lake Michigan from 601 feet above the ground. When the next wave of climbers started to arrive, we crowded into an elevator with a team of local firefighters (who completed the climb in full gear and seemed ready to do it again) and rode, gratefully, down to the lobby.