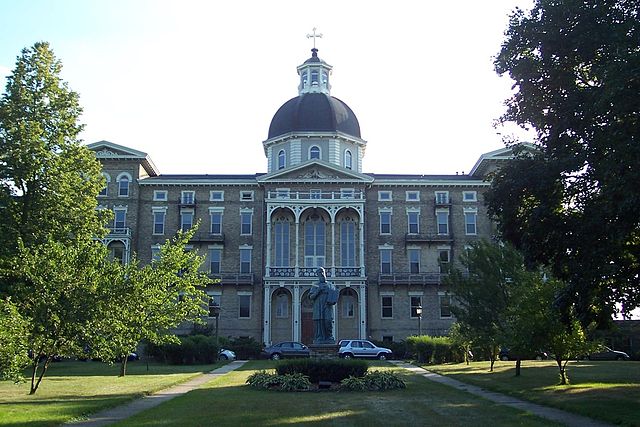 This institution is the major training facility for Roman Catholic priests who serve in the Archdiocese of Milwaukee. It also forms young clergy who serve in other parts of Wisconsin and sections of the Midwest. Moreover, some of its graduates are found in Rome and Africa. Although it currently does not support an accredited academic program, it is one of the longest serving chartered institutions of the State of Wisconsin.

St. Francis de Sales Seminary was founded by the first bishop of Milwaukee, John Martin Henni. Appointed in 1843, Henni realized early on that the new diocese—which then included the entire state of Wisconsin and even a bit of Minnesota—would need new priests to minister to a rapidly growing flock.

Until he could build a new seminary, Henni took students into his own home for instruction. In 1849, a Catholic community from Germany purchased land on the city’s South Point. Nearby, Bishop Henni purchased 53 acres of land on Deer Creek and the adjoining area, compelled the community to cede lands, and created a huge Catholic enclave on the southern lakefront. With the help of European benefactions, the seminary became a reality. In July 1855, Henni laid the cornerstone for a new St. Francis de Sales Seminary. The building was constructed in segments, but the first portion was ready for occupancy in January 1856. Later wings were added in 1861 and 1871. In the early 1950s, with bulging seminary enrollments, a new dining hall and powerhouse were built, and in 1957, a new seminary residence, Heiss Hall, opened.[1]

St. Francis de Sales began with a reputation as a seminary to train German-speaking young men for the priesthood. The majority of the professors were trained in German language, and the culture of the seminary and its cultural identity were German. By the early 20th century, the German character of the seminary had been tempered and new faculty brought in a more generic seminary formation—one that laid aside hard-edged ethnicity.[2] Young men came at the age of 13 or 14 and resided at the seminary, taking classes, recreation, and receiving spiritual formation until their ordinations at age 25 or 26. The size of classes grew each year as the appeal of a priestly vocation accelerated through the 20th century, reaching a peak in the post-war era and then sharply declining in the 1970s until the end of the era.

Change in curriculum, methods of formation, and spirituality have always been part of the seminary’s history. For many years, the seminary gave two years of instruction in philosophy and four in theology. In 1963, a formal, free-standing college program was created and together with the high school program transferred to a new multi-million dollar facility called De Sales Seminary and College—today known as the Cousins Center.

St. Francis underwent significant change with the onset of Vatican II era reforms. It dramatically re-worked its curriculum to resemble more of a professional school approach to ministry; it admitted lay men and women to its programs in the early 1970s—a program that eventually drew more students than the traditional seminary curriculum. In 2006, Archbishop Timothy Dolan closed the academic program but kept the seminary building open as a venue for the formation of priestly candidates only from the Archdiocese of Milwaukee. Seminary intellectual formation was transferred to Sacred Heart Seminary and School of Theology in Hales Corners, Wisconsin. Gradually, other Wisconsin dioceses began to send men to St. Francis for their priestly formation.[3]