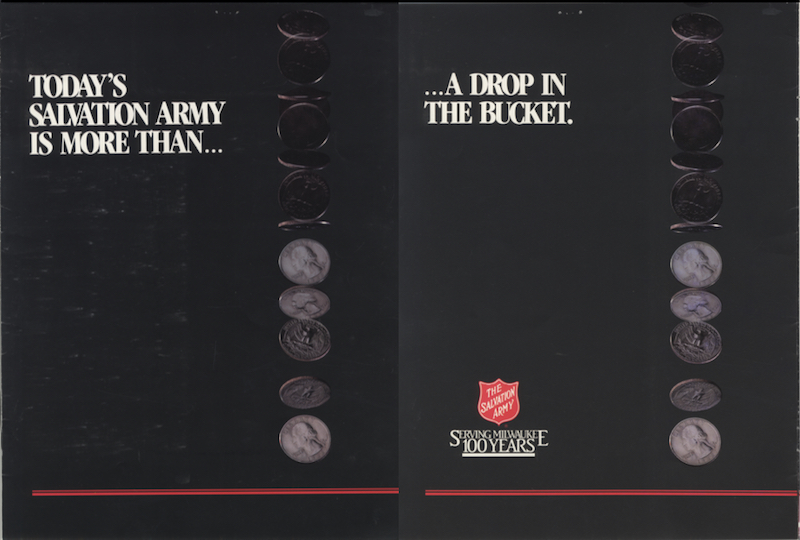 From its entry into Milwaukee in 1889, the Salvation Army has pursued its two-part mission to “preach the gospel of Jesus Christ and to meet human needs in His name without discrimination.”[1] Captain Samuel Neil, his wife, and four companions established Milwaukee’s first Salvation Army center on what is now North Plankinton Avenue.[2] In 1893, the Milwaukee Salvation Army held its first red kettle drive, and a decade later the organization opened the first of its Milwaukee-area homeless shelters and thrift stores.[3]

The Milwaukee Salvation Army’s charitable services range from food pantries and thrift stores to children’s programs, housing services, and disaster relief. Throughout the tumult of the 1960s, the organization attempted to remain apolitical in its social services. This goal to provide services regardless of race may have helped the organization’s 25th Street offices to come through Milwaukee’s civil disorder of 1967 unscathed.[4] In 2015, the organization provided 46,839 nights of lodging at its emergency shelter.[5] The annual Christmas Family Feast dinner at the Wisconsin Center is one of the largest Salvation Army Christmas meals in the country, and the organization’s Milwaukee Feed the Kids program provides over 2,300 meals daily during the summer.[6]