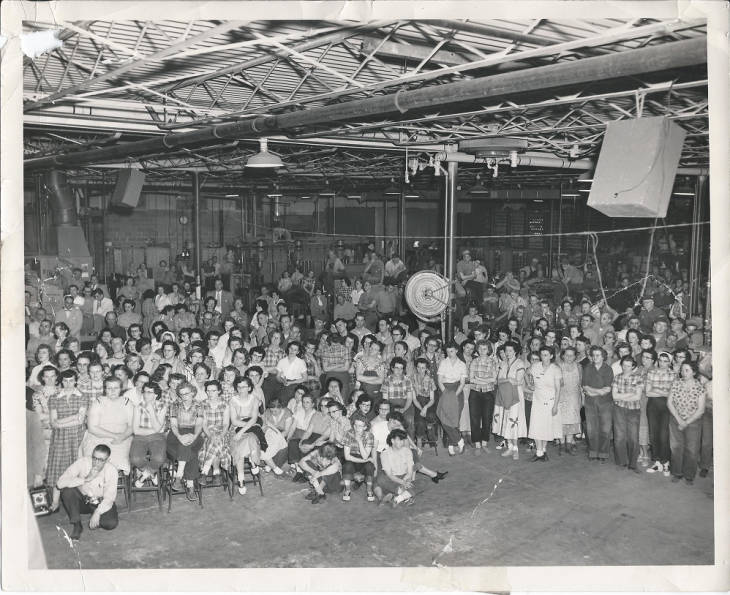 A privately owned producer of aluminum and stainless steel cookware, Regal Ware Worldwide is headquartered in Washington County. The company employs about 300 workers at its corporate and manufacturing facilities in Kewaskum and West Bend.[1] In 2014, over half of Regal Ware’s sales of its American-made products were in foreign markets.[2] Founded by James O. Reigle and two associates in 1945, Regal Ware is directed by the second and third generations of the Reigle family.[3] Focusing on high-end cookware sold directly to the consumer, Regal Ware Worldwide is one of the last remaining examples of Wisconsin’s aluminum and cookware industries.[4]

Through the second half of the twentieth century, Regal Ware expanded via new markets and acquisitions. The company’s early sales model relied on direct sales demonstrations and inclusion in premium catalogs offered by trading stamp companies.[12] Regal Ware’s 1960s acquisitions of aluminum companies in Ohio, Mississippi, and Illinois increased the company’s direct-to-the-consumer catalog.[13] Acquisitions in the 1970s and 1980s, including Club Products, helped Regal Ware expand in the retail market.[14] By 1995, the company’s product lines included over 500 cookware items and kitchen appliances.[15] Direct sales continued to account for over a third of Regal Ware’s sales, and in 1999, the company sold its retail brands to Manitowoc’s Mirro Aluminum Company in order to focus on the direct-to-the-consumer segment.[16]

How Do Histories Merge?: The West Bend Company

When entities merge, what happens to their histories? As I have been writing for the Encyclopedia of Milwaukee, this is a question that keeps percolating in the back of my mind. Where does the history of North Milwaukee belong, for instance? The first village incorporated from the Town of Granville, this suburb later merged with the City of Milwaukee.[1] Where does its early history fit? In the Granville entry? In the Milwaukee entry? In its own entry? Does anyone even remember (or care) that North Milwaukee existed? Granville and Milwaukee have their own histories, after all. These entries may mention North Milwaukee, but they are, in reality, distinct from North Milwaukee’s history. Lately, I have been asking many similar questions about the history of the West Bend Company.

As with integrating municipal histories, there is no one correct way to combine company histories. The future of Regal Ware will be built on both the histories of Regal Ware and the West Bend Company, not to mention other companies Regal Ware has acquired over the years. Histories are always narratives, and what we choose to remember and highlight becomes our history. In 2013, the Wisconsin Historical Society erected an historical marker to the West Bend Aluminum Company on West Bend’s Main Street.[6] With this lasting memorial, it looks like the West Bend Company’s history will long be remembered.