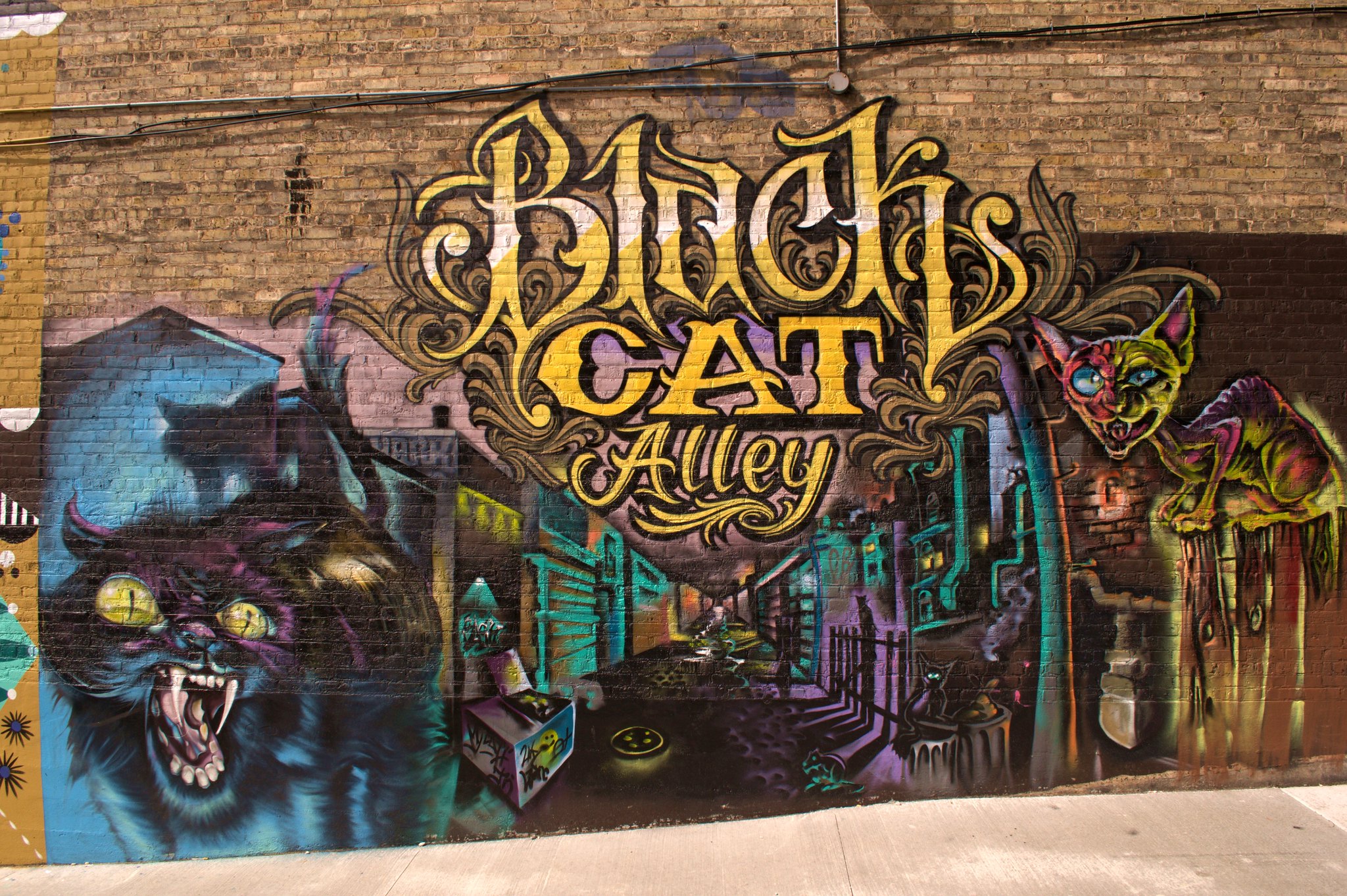 Murals in their modern form, which evoke both artistic and social functions, have been integral to the process of placemaking in Milwaukee. Murals of many kinds, including community-activism murals, artistic murals, and historic murals, all communicate the personalities of locations through the use of images that are meaningful to the communities surrounding them.[1] Whether created by an individual or by a group, a mural’s presence within a community expresses the shared values of that place and gives the people of that place a channel for articulating their public voice.[2]

Some of Milwaukee’s earliest murals were painted as a part of the Works Progress Administration (WPA) Federal Arts Program. Starting in the 1930s, the WPA commissioned the painting of murals in a number of public buildings in and around the city. In 1936, Myron Nutting painted murals of the Athenian Acropolis and an ancient Egyptian mummification scene for the Milwaukee Public Museum. The Milwaukee Theatre still houses nine WPA murals by Thorsten Lindberg that illustrate historical subjects of local significance, including Solomon Juneau’s trading post, as well as Byron Kilbourn, Enoch Chase, and George Walker.[3] WPA murals can also be found in schools in the Milwaukee area, like the 1930s mural painted by Nutting at Wauwatosa East High School that portrays a romanticized scene of old Wauwatosa.[4]

A considerable shift in mural-making occurred in the mid-twentieth century, as murals became media for community-based activism. The Chicano Mural Movement of the 1960s played a central role in this transformation of the social function of murals, which quickly spread to all major cities in the United States during the cultural and political movements of the period.[5]

In Milwaukee, community-activism murals are numerous. In 1984 Reynaldo Hernandez partnered with members of the Bronzeville neighborhood to paint a mural illustrating the arts and culture of the African American community on the Milwaukee Inner City Arts Council Building at 642 W. North Avenue.[6] “Peacemakers,” a mural located on the Milwaukee County Transit Bus Depot on Kinnickinnic Avenue, portrays activists from Milwaukee and around the world, including James Groppi and Nelson Mandela. It was painted in the late 1980s by members of the Milwaukee NAACP Youth Council and, like Hernandez’s work, stands as a testament to the activism of marginalized communities in Milwaukee.[7] In the twenty-first century, the creation of murals remains an important mechanism for activists representing marginalized communities. For example, “Sherman Park Rising” (2017), located at 4715 W. Center Street, was created as a visual representation of adversity and hope in the Sherman Park neighborhood. It was painted by Tia Richardson with help from Sherman Park community members.[8]

Murals throughout Milwaukee represent a range of ethnic groups including (but not limited to) the “History of Latinos in Milwaukee” (1995) by Roberto Cisneros and Reynaldo Hernandez on the Bruce-Guadalupe Community School, which offers a visual narrative of the growth of Milwaukee’s Latinx community; “Culture Work” (2017) by Raoul Deal and students from Milwaukee high schools and the University of Wisconsin-Milwaukee on Kinnickinnic Avenue and S. 1st Street, which illustrates the work of the Hispanic-based service organization, United Migrant Opportunity Services. “The Rhythms of Water, Land and Sky” (2013), at 420 S. 1st Street, in which Mark David Gray portrays a Native American in traditional dress; and the Asian-American mural “West Cly” (2014) by Jonathan Wakuda Fischer at the corner of 30th Street and Clybourn Street, depicting a white crane in flight surrounded by geometric designs.[9]

Not all murals in Milwaukee function as media for community identity and social activism. Many contemporary murals throughout Milwaukee were created simply as works of art. One of the most famous was Robert Wyland’s “Whale Commuters” (1997)—a realistic picture of a pod of humpback whales painted on the Milwaukee County Courthouse Annex— that greeted southbound commuters on I-43 for almost a decade until the Annex was demolished in 2006.[10] Black Cat Alley, a grouping of murals in an alley behind the Oriental Theatre, features artistic representations of surreal and abstract scenes ranging from the psychedelic deer in John Kowalczyk’s “Merlin the Albino Buck” to the simplistic butterflies in Jeremy Novy’s “Monarch Butterflies.”[11] Artistic murals can also honor the history of a place. The “Utility Box Murals,” twenty murals painted on ten utility boxes along Wisconsin Avenue, was completed in 2017 by visual artist Mauricio Ramirez. These images highlight iconic figures related to the history of Milwaukee, including the architect Charles Koch, politician and civil rights leader Vel Phillips, and legendary Marquette University basketball coach Al McGuire. Similarly, “Migration” (2018) by CERA and Katie Batten covers the interior of the Jefferson Street pedestrian tunnel with artistic representations of Milwaukee landmarks such as the Gas Light Building, the Hoan Bridge, and the Public Market juxtaposed with images of local and migratory birds.[12] 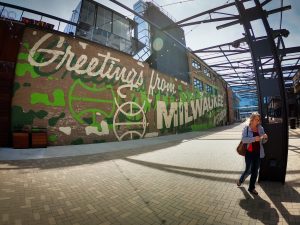 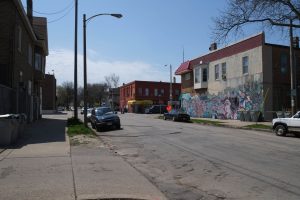 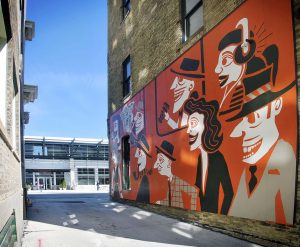