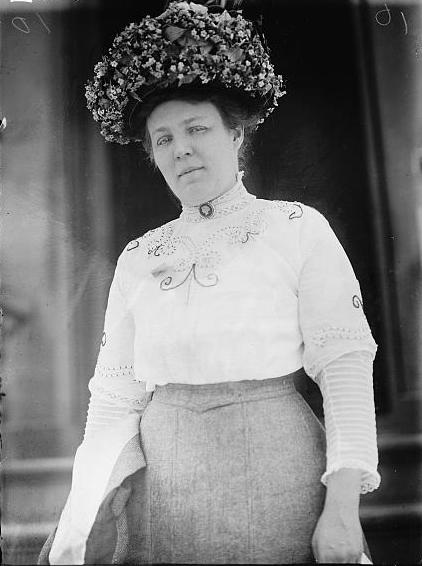 Meta Schlichting Berger won election to the Milwaukee school board in 1909, seven years after women could vote in such an election, and a decade before women earned the right to vote in the 19th Amendment to the Constitution. Berger remained on the school board for another 30 years.[1] In this and other prominent public roles in Milwaukee, she espoused socialist, feminist, and communist viewpoints to varying degrees, never wholeheartedly approving of every facet of any of them.

Meta Schlichting was born in Milwaukee in 1873 to parents who came to the city from Germany during their childhood. Schlichting’s father, Bernard, who served on Milwaukee’s school board, hired Victor Berger to teach German. He became a close family friend. In 1894, Schlichting received her degree in education from the State Normal School in Milwaukee. Schlichting taught at Milwaukee public schools until she married Victor Berger on December 4, 1897. By the end of the century, they had two daughters.[2] Their marriage lasted until Victor’s death in 1929. For the next fifteen years, until her death in 1944, Berger continued to fight for various political causes.

Meta Berger initially served as the dutiful housewife, yet she continued to expand her knowledge. She became an advocate of socialism after Victor encouraged her to read books with a socialist perspective and attend events that eventually isolated her from her more conservative family. After attending her first Socialist Party convention in 1904, Meta Berger became interested in politics. Later, in 1909, the Socialist Party persuaded Berger to run for the Milwaukee school board. She won, and later became the board’s president. While on the school board, she argued in support of giving female teachers the right to continue teaching after marriage, serve as department chairs and school administrators, and join unions. Nevertheless, as her stature grew, her husband discouraged her active participation independent of him, believing that it would distract her from her household duties.[3]

As her reputation grew, however, Berger received a two-year appointment to the Wisconsin Board of Education and held a position on the state’s board for normal schools. From 1914 to 1917, Berger served as vice president for the Wisconsin Woman Suffrage Association. Later, Berger joined the National Woman’s Party. Berger remained on the school board and joined various progressive organizations in the 1920s. She became a visible part of Robert M. La Follette’s national campaign in 1924. Additionally, she was appointed to a six-year term on the Board of Regents of the University of Wisconsin.[4]

Following her husband’s death, Berger remained on the school board until 1939. She was considered for the vice-presidential candidate for the Socialist Party in 1932 but broke from the party in 1940 due to her involvement with communist organizations. In the 1930s, Berger explored Soviet communism, leading to a visit to Russia in 1935. Upon her return from the Soviet Union, Berger applauded the availability of nurseries for female workers in Russia, which allowed for a level of economic independence denied American women.[5] Nevertheless, her political stances were not necessarily consistent. When, for example, controversy arose over the University of Wisconsin’s decision to bar Bertrand Russell’s wife from speaking on campus in 1928, Berger, though an advocate of first amendment rights, supported the university’s stance and criticized Dora Russell for her several marriages and open mind regarding sex.[6]