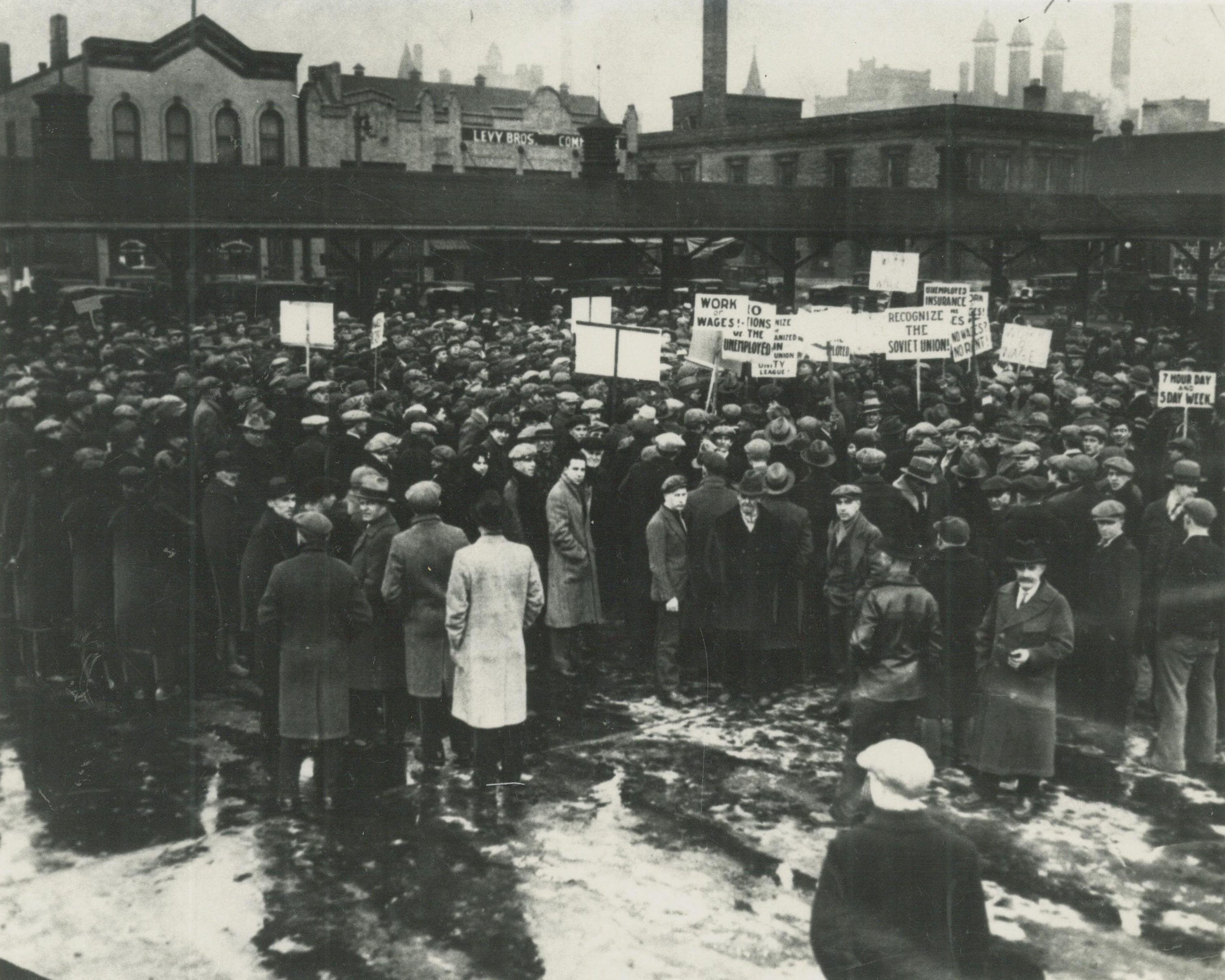 The Communist Party of America organized in the United States in 1919 was a split-off from the Socialist Party after the Russian Revolution. It was affiliated with the Communist International, often called the Third International, which advocated for world communist revolutions to overthrow capitalism. The Communist Party of Wisconsin organized as a statewide branch of the national party in 1919, was headquartered in Milwaukee, and reached its peak in the 1930s and 1940s.[1]

In addition to distributing the national party newspaper, The Daily Worker, the Communist Party of Wisconsin also published the Wisconsin Voice of Labor and the Wisconsin People’s Voice. It also circulated national and local party literature through its People’s Bookshop and Fred and Mary Blair’s store, Mary’s Bookshop.[3]

The party engaged in direct action and solidarity demonstrations. On March 6, 1930, for instance, thousands of communists and supporters staged an International Unemployed Workers Day demonstration in the Haymarket (6th and Vliet) to draw public attention to the growing ranks of unemployed workers during the Depression. The event ended violently as demonstrators clashed with police who moved in to disperse the crowd.[4]

The party was also very active in Milwaukee’s labor movement, particularly in the Congress of Industrial Organizations’ unionization drives of the 1930s and 1940s. Most notably, Milwaukee communists assisted workers with organizing the CIO union, UAW Local 248, at Allis-Chalmers in 1937.[5]

Throughout the 1930s and 1940s, the party also organized annual May Day celebrations at the Milwaukee Auditorium and other large halls. These events featured speeches on the exploitation of labor and the values of communism, locally, nationally, and internationally.[6]

There were a number of prominent communist figures in Milwaukee, especially during the party’s peak in the 1930s and 1940s. Fred Basset Blair served several terms as state chairman and remained a prominent local party leader from the early 1930s to the 1980s.[7] Eugene Dennis served as state secretary from 1935-1937, moving on to become general secretary of the national Communist Party in 1945.[8] Meta Berger, Milwaukee School Board member and widow of Milwaukee Socialist Congressman Victor Berger, also became active in party coalitions with other labor and political organizations and often hosted party meetings and social gatherings at her home.[9]

The party survived the collapse of the Soviet Union and the world communist international in the 1990s. The national Communist Party convention was hosted in Milwaukee in 2001.[11]