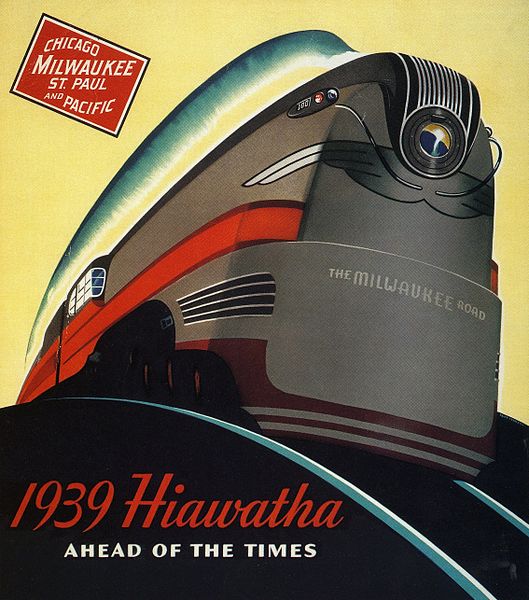 When the Milwaukee Road inaugurated its new high speed Hiawatha trains in 1935, it created a nationally recognized brand.

The railroad purchased streamlined steam locomotives from American Locomotive Company, built modern passenger cars in its Milwaukee Shops,[1] and launched an award winning advertising campaign.[2] Calling itself the Route of the Hiawathas, the railroad named their trains for the “swift of foot” Native American in Henry Wadsworth Longfellow’s 1855 poem, “Song of Hiawatha.”

Otto Kuhler was responsible for styling of the 1935, 1936, and 1938 trains, introducing larger steam locomotives in 1938. As new equipment arrived, earlier Hiawatha cars were assigned to connecting service throughout the Midwest. Diesels started to replace steam in 1941. New equipment included the signature sky top lounge observation car, designed by Brooks Stevens,[5] and Super-Dome cars, added in 1952.

The Hiawathas became a part of the popular culture with carefully crafted toy trains produced by Lionel and American Flyer. Ted Rose, a watercolor artist born in Milwaukee, memorialized the trains in a postage stamp series issued in 1999.[6]

The decline started when the Olympian Hiawatha run from Chicago to Seattle/Tacoma was discontinued as a through train in 1961, with other services ending over the next decade. The last Hiawatha continued until April 30, 1971, when Amtrak took over most intercity passenger service. In the 21st century, Amtrak runs several trains daily between Milwaukee and Chicago under the commemorative route name Hiawatha.