The Green Bay Packers, founded by Earl (Curly) Lambeau and George Calhoun, joined the American Professional Football Association (later the NFL) in 1921.[1] One of the NFL’s most successful franchises, the Packers have won thirteen national championships, more than any other team in NFL history, and four Super Bowls (following the 1966, 1967, 1996, and 2010 seasons). The Packers have twenty-two Pro Football Hall of Famers, including Curly Lambeau, Vince Lombardi, Bart Starr, Ray Nitschke, Willie Davis, and Reggie White.[2] From 1933 through 1994, the Packers played three or four regular-season games in Milwaukee each season.[3] The Packers also hosted one playoff game at Milwaukee County Stadium, the Western Conference Championship against the Los Angeles Rams on December 23, 1967.[4] 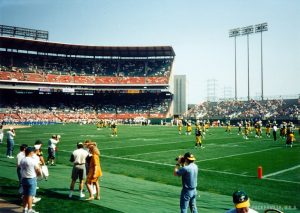