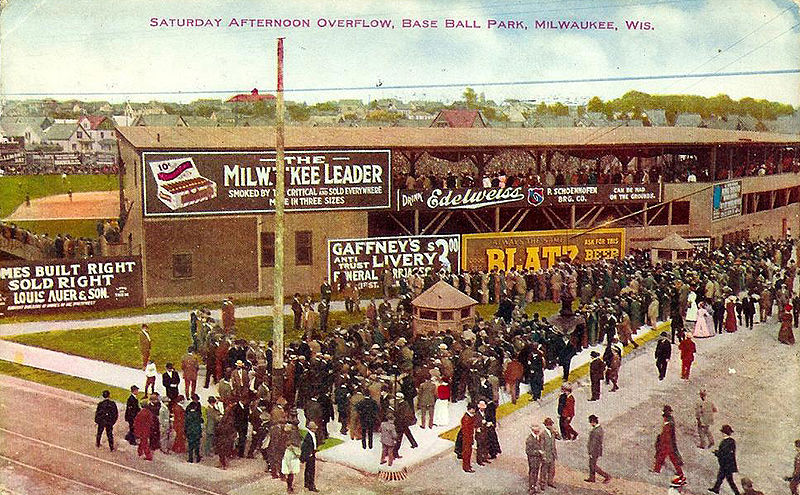 Originally called “Athletic Park,” Borchert Field was the longest lasting professional ballpark in Milwaukee.[1] Built in 1888, the field stood at Burleigh and 8th Streets. The park was home to the major league Milwaukee Brewers (1891), Negro League Milwaukee Bears (1923), All-American Girls Professional Baseball League Milwaukee Chicks (1944), and the minor league American Association Milwaukee Brewers (1902-1952). Borchert Field also served as home field for the National Football League’s Milwaukee Badgers (1922-1926) and Green Bay Packers (for one game in 1933).[2] The stadium was demolished in 1953 as construction of County Stadium was finalized.[3] After a few years as a playground, the space was eventually cleared for the construction of I-43.[4]

How Microfilm and the Internet Get Along: A Demonstration

I was presented with a quest. A quest to journey to the depths of microfilm department of the Golda Meir Library at the University of Wisconsin-Milwaukee. Working with microfilm really makes me feel like a true detective of history. You have to use the old film, with the clunky machines. The way the documents look on a microfilm machine has such a classic feel to it. There is nothing quite like working with an old microfilm machine. Needless to say, I humbly accepted this quest.

A member of the public contacted the Encyclopedia of Milwaukee regarding the Borchert Field entry posted on the project website. Borchert Field was Milwaukee’s original professional baseball stadium for a variety of teams. It was home of the Milwaukee Brewers, Negro League Milwaukee Bears, All-American Girls Professional Baseball League, the Milwaukee Chicks, the Minor League Milwaukee Badgers, the NFL’s Milwaukee Badgers, and it even hosted the Green Bay Packers for a game in 1933.[1] The contact informed us that Borchert Field had been demolished in 1953, rather than 1952, which is what we had originally posted. Michele Felski-Smith, the graduate student Research Assistant leading the EMKE’s fact-checking program, did some digging online and narrowed down the destruction of Borchert Field to between October 10, 1952 and March 5, 1953. I was then given instructions to head over to the library to see what I could find regarding Borchert Field’s demolition in the Milwaukee Journal or Milwaukee Sentinel records within the range of those dates.

Microfilm, even in an age of digital preservation and keyword searches, is still an incredibly useful and important method of saving the documents from our past. Microtext preserves hundreds of documents on tiny rolls or strips of film. Thousands of rolls can be stored in a very small space. Not everything can or will be digitally preserved, so microfilm is still the go-to medium for particularly old documents and newspapers which cannot be found in a digital archive or accessed physically. Microfilm can be incredibly tedious to work with. There is no way of finding out what lies within the film, so you have to browse through seemingly endless miniature pictures in order to successfully locate the desired information. To work with microfilmed newspaper sources, you need a date, a range of dates, or a specific document that you are looking for. Microfilm has to be used on a specialized machine. Newer microfilm machines allow you to read the documents on a nice flat 24-inch LCD screen connected to a desktop computer, but it is just not the same as using the old bulky machines.

When I arrived in the microfilm department, I had to first remind myself how to operate these rather large machines. I cannot say that I journey to microfilm all that often, even though I do love it dearly. I was first introduced to microtext while working on a project for a history research methods course taught by Dr. Amanda Seligman at UWM. Knowledge of microtext is essential to any fledgling historian. For my search regarding Borchert Field’s demolition, I started with the October 1952 film rolls. I attached the film roll to the machine and began my search. I knew the first thing I had to do was come up with a search strategy. Because it is not possible to simply type in what I was looking for, I had to first get to know the newspaper’s format. I quickly identified that on the front page of every day, there was a small section that highlighted local news stories. Most of these stories were expanded on in different sections of the newspaper, including a local news section. I also expected that anything regarding Borchert Field would surely show itself in the sports section. So I had my method down, and I began searching. I worried that the only reference I would be able to find regarding Borchert Field would be on the last roll of microfilm I hooked up to the machine. However, I like to think I fought this fear fairly well.

My morale was bolstered not long after I began searching. I found a small reference from Friday October 24, 1952, right smack dab on the front page. It was just a small reference, but it at least confirmed that I had not missed anything. Another fear I had was that I would scroll past something important, an easy mistake to make with microfilm. The article I located discussed budgetary plans for Milwaukee. One of them was to complete the purchase of Borchert Field for the sum of $105,500. This was not a lot to go on, but it at least told me that Borchert Field was still standing since the city had not even purchased the building yet. I continued my search, eventually stumbling across another small reference from November 13, 1952. This article did not mention Borchert Field directly, but it did say that the new County Stadium was nearing completion. Some information is important in that it serves to create a sort of timeline in your head. So I knew Borchert field was not yet destroyed, and that the new Stadium was not yet complete. This was useful information! By this time, fatigue was beginning to set in. October 10th through November 13th covers quite a bit of ground when it comes to microfilm. Not only were my eyes becoming sore from flipping through pages of projected newspaper, I was beginning to get frustrated with how little I was finding. Working with microfilm is not easy. It is like a delicate flower. It requires patience, perseverance, and a little luck. If you treat the microfilm with respect, it will show you the way. But my modern mentality began to show itself.

Because of my frustration, I thought that the internet would surely have something to say about Borchert Field. Baseball is huge in Milwaukee; how can there not be a reference to its first stadium’s destruction? Ultimately, what I was hoping to find was a professional article that cited sources. Maybe, with a little luck, someone also used the Milwaukee Journal or Sentinel and could help point me in the right direction. With a simple search I was able to find an article regarding Borchert Field that listed Milwaukee newspaper sources at the bottom. I mostly ignored the article; I wanted to go straight to the primary source. The article cited a whole host of dates. I pulled the microfilm for the corresponding dates and sure enough, I finally found what I was looking for. I discovered two key articles, one from January 18, 1953, and one from June 11, 1953. Now naturally, I would have eventually stumbled upon these articles, but the internet did help quite a bit. The January 18th article indicated that Borchert Field was in the process of being dismantled. The June 11th article had a photograph and caption showing the final remnants of old Borchert Field being removed by towering cranes. This was enough information to confirm that Borchert Field was indeed dismantled in 1953, not 1952. The Borchert Field entry was updated accordingly.

Microfilm is an incredibly important tool. My experience with microfilm shows that while it is a difficult medium to work with, it is still incredibly useful and relevant. The articles I looked at were not in an online database anywhere. Copies of the original newspaper take up too much space for libraries to house forever. Thankfully, microfilm was there to save the day. My experience also shows that while the quick digital search has sort of spoiled us, it can be used effectively in conjunction with older forms of preservation. The internet helped me pinpoint dates, and microfilm allowed me to physically see the newspaper sources. The usefulness of microfilm cannot be overstated, even with our access to modern technology, where the world’s knowledge is right at our fingertips.