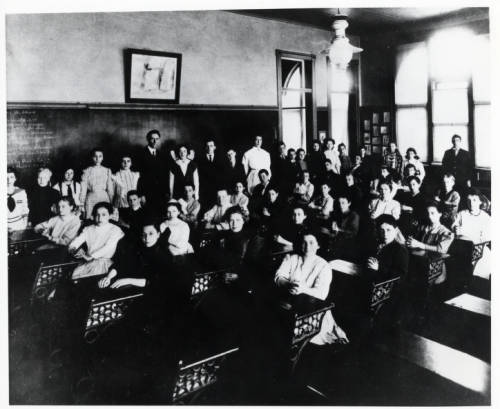 Born Golda Mabowitz on May 3, 1898 in Kiev, the future Israeli Prime Minister, Golda Meir, faced anti-Semitism from an early age.[1] Indeed, in 1903 her family moved to Pinsk to escape the threat of Russian pogroms. Shortly thereafter, the family emigrated to Milwaukee. There, the family opened a grocery store, which Meir helped run while attending the Fourth Street School (now named Golda Meir School). Valedictorian of her class at Fourth Street, Meir went on to attend North Division High School and then Wisconsin State Normal School. During this time, Meir became a leader of the Milwaukee Labor Zionist Party.

Eager to participate more fully for the cause,[2] Meir and her husband Morris Meyerson set out for Palestine in 1921, which at the time was under British civil administration and would remain so until 1948. Here she joined Kibbutz Merhavia, a communal settlement, until 1924, when she moved to Jerusalem with her family. Four years later, Meir became the secretary of the Women’s Labor Council and in 1934 joined the executive council of the Histadrut (General Federation of Jewish Labor).[3] Following World War II, Meir was a signatory on the Israel Independence Declaration in 1948. She then went on to serve as the Minister of Labour (1949-56) and Foreign Minister (1956-66). In 1966, Meir retired from politics due to health problems but soon reemerged to help form a coalition government from the Mapai, Achdut HaAvodah, and Rafi parties, known as the Israel Labor Party. She served as Prime Minister (1969-1974) during such crises as the Yom Kippur War and the Munich massacre at the 1972 Summer Olympics.

In 1969, Meir returned to Milwaukee during a diplomatic trip to the United States. In this short visit, she spoke of her childhood in Wisconsin and returned to her old Fourth Street School to meet with schoolchildren.[4] Just under a decade later, on December 8, 1978 the Iron Lady[5], as she is often called, died in Jerusalem. 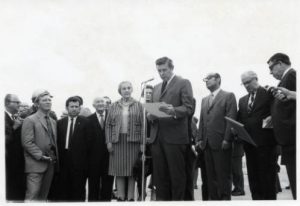