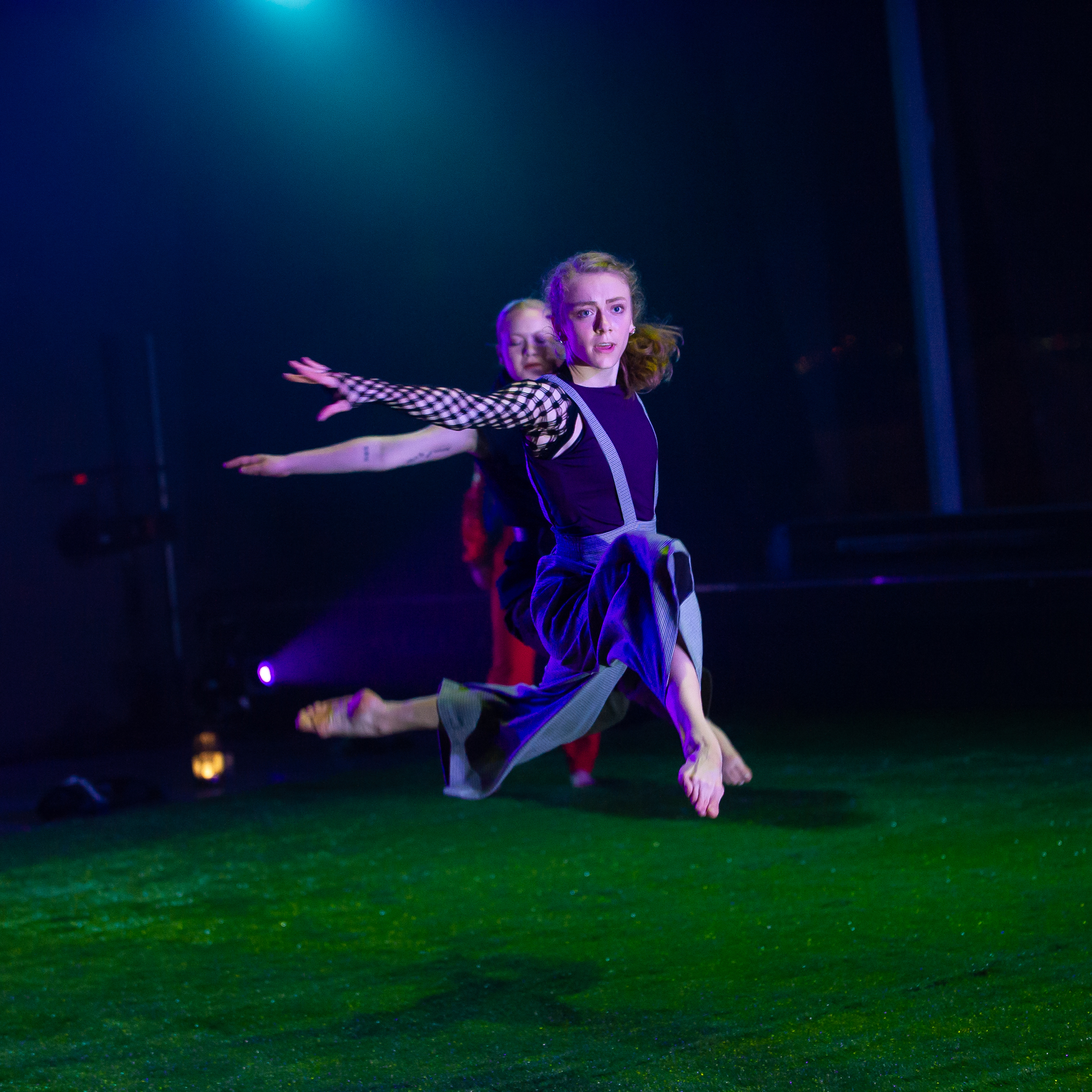 Milwaukee’s tradition of performance has been nurtured by a mix of professional companies focused on modern dance and ballet. Because dance has been marginal in Milwaukee’s arts economy, educational institutions such as the Wisconsin College of Music and the University of Wisconsin-Milwaukee’s Peck School of the Arts (UWM) have been crucial to sustaining the field by cultivating new institutions.

Modern dance in Milwaukee begins with Florence West (1912-1994).[1] West left Milwaukee at seventeen to dance in a Broadway road show, quit when she discovered ballet during a tour stop in Detroit, and found her way into the corps of the Chicago Civic Opera ballet. A Milwaukee opera producer asked her to come home to add choreography to a local production of Carmen. She soon became the go-to dance person for Milwaukee dance, theater, and opera companies. In 1946, she started teaching at the Wisconsin College of Music (later the Wisconsin Conservatory), where she taught generations of Milwaukeeans her fusion of ballet and modern techniques. West continued her education at the University of Wisconsin-Madison and at Black Mountain College, where she studied with Merce Cunningham. She brought that knowledge home to share with her many pupils. West’s most famous protégé was Liz Lerman, who founded the important Liz Lerman Dance Exchange in Washington, D.C.[2]

In 1960, Ginka Cohn and four other recent graduates of the University of Wisconsin-Madison dance program—the nation’s first dance degree program—formed the Milwaukee Modern Dance Council (MMDC).[3] The group presented shows, provided classes, and gave college scholarships to promising young dancers. The MMDC nurtured many local dancers, including Susie Bauer, who taught at the University of Wisconsin-Milwaukee and for decades ran Susie Bauer Contemporary Ballet; Ferne Caulker, who founded the influential Ko-Thi African Dance Company[4] and became an important dance ethnologist at UWM; and Betty Salamun, who founded and still operates Dancecircus.[5] The MMDC disbanded in 1986, due to waning finances and membership, while Bauer closed her company in 1996.

Debra Loewen was the most enduring and important of the dancer/choreographers in the generation just after Bauer, Caulker, and Salamun. Loewen, a native of Stevens Point, Wisconsin, studied at the University of Delaware before coming to UWM for her MFA. She started the Wild Space Dance Company in 1986.[6] One of its first programs took place in the bottom of a dry swimming pool, with the audience seated around its edge. Loewen is best known for site-specific works that frame or illuminate unsung bits of Milwaukee’s urban landscape.

Danceworks, Inc. brought recognition, some degree of financial stability, and great artistic vibrancy to Milwaukee’s dance scene in the early 21st century.[7] Polly Morris and Mary Newton founded the non-profit in 1992, with an eye toward presenting local and out-of-town companies in an intimate studio setting, conducting classes that would allow local dancers to earn money, and providing rehearsal space for the creation of new works. By 1997, Danceworks’ focus shifted to include a vibrant range of contemporary dance styles. Morris and Newton brought in Sarah Wilbur from the burgeoning UWM Dance Department, as first artistic director of the Danceworks Performance Company (DPC). Wilbur—and original Danceworkers Anina Bacon, Becky Blong, Cynthia Collins-Sinotte, Joan Fernandez, Andrea Hill, Jen Moore and Laura Teska—brought a certain vaudevillian theatricality into play. They learned both dance technique and theatricality at UWM, largely due to the influence of Ed Burgess and, later, Janet Lilly.[8]

Deborah Farris, the group’s first executive director after the co-founders, built a robust outreach program. It features but is not limited to the Mad Hot Ballroom program that teaches ballroom dance to large numbers of eager Milwaukee school children.[9] Amateur and professional dancers flock to the Danceworks classes, which embrace tap and hip-hop in addition to ballet and modern dance. After a highly successful 10-year run, Wilbur left to get her PhD at UCLA in 2007. Dani Kuepper took over. Through both their tenures, the technical prowess of DPC dancers soared. Because of Danceworks, talented performers coming out of UWM can stay home and make a bit of a living. They no longer automatically head for New York. Danceworkers such as Kuepper, Kelly Anderson[10] and Christal Wagner[11] have become local celebrities.

Danceworks continues to provide affordable performance space and such services as ticket sales to other companies. Danceworks has hosted performances by Catey Ott Dance Collective[12]; the provocative Elizabeth Johnson’s Your Mother Dances ensemble[13]; and a great many independents, often under the banner of the organization’s Dancelab series.[14] By giving so many dancers gainful employment and classes in which to stay sharp, Danceworks has helped to create a pool of highly skilled dancers for Milwaukee choreographers to employ.

The scene that Danceworks has nurtured would not exist without the powerhouse dance program at the University of Wisconsin-Milwaukee.[15] The department flourished in the 1970s but waned in the 1980s, when it lost its status and became an appendage of the theater program. The arrival of Ed Burgess in 1989,[16] with Marcia Parsons as chairperson, marked the start of the department’s turnaround. Burgess, who arrived with a substantial professional résumé in New York, attracted serious students and inspired fierce dedication and loyalty to the art. He also fostered in UWM dancers an entrepreneurial spirit and attention to the business side of dance. A few years later, Janet Lilly, lately of Bill T. Jones/Arnie Zane and Company, enhanced Burgess’s efforts. Burgess died suddenly, at age 58, in 2011. Lilly then moved on to the University of North Carolina at Greensboro.[17]

UWM’s innovative MFA program, launched in the early 1980s, also made an impact. The program aims at mid-career professionals looking to hone their skills and prepare for academic life after stage careers. The MFA has brought legions of polished professionals to campus for summer intensives and maintained strong connections as these advanced students continued with their careers—many as company directors. The program has created a pipeline between Milwaukee and New York, Chicago, and other big-market dance centers.[18]

The UWM Dance Department was also responsible for the founding of the Milwaukee Ballet Company (MBC). The company began in 1969, when Roberta Boorse and Myron Nadel, then chair of the department, hatched a plan to create a professional ballet company within the school. They aspired to take advantage of the space provided by the new Milwaukee County Performing Arts Center (PAC).[19] In April of 1970, the fledgling company put on its first program at the UWM Main Stage Theater. In December of 1970, MBC staged its first production, Coppelia, at the PAC (now the Marcus Center), with guests artists Cynthia Gregory and Ted Kivitt, of American Ballet Theatre.[20] Yuri Gottshalks was the MBC’s artistic director. In 1971, Nadel became resident choreographer. In the summer of 1972, assistant professor Gloria Gustafson, a former ballet dancer, became Artistic Director, and Lawrence Rhodes, a former Pennsylvania Ballet principal, became associate director. In 1974, the Milwaukee Ballet split from UWM, opened the Milwaukee Ballet School, and brought in Jean-Paul Comelin as artistic director.[21] Comelin produced the first annual Milwaukee Ballet Nutcracker in 1977. The company’s home, which began life as the Schlitz Tivoli Palm Garden at 5th and National on the South Side, burned in 1979. The Carly Development Group restored the building, which still houses MBC and its offices, costume shop, and four studios.[22]

During the 1980s and 1990s, the Milwaukee Ballet Company experienced a series of internal conflicts, financial crises, and leadership changes. A merger with the Pennsylvania Ballet unraveled.[23] The 2002 arrival of Michael Pink from the Northern Ballet Theatre in England as artistic director stabilized the MBC financially.[24] Pink has stocked his seasons with evening-length narrative ballets: Romeo and Juliet; Dracula, a fascist-occupation retelling of Giselle; an aerial Peter Pan; a danced La Boheme; and Mirror, Mirror, a grown-up take on Snow White.[25] He also re-organized the company into an ensemble and eliminated the star system. He and executive director Dennis Buehler—who left Milwaukee for Portland’s Oregon Ballet Theatre in 2014—proved to be a highly competent team. They have led the Milwaukee Ballet Company into its most stable sustained period. 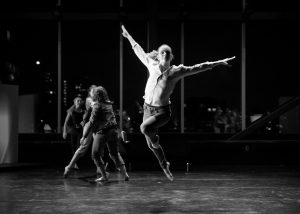