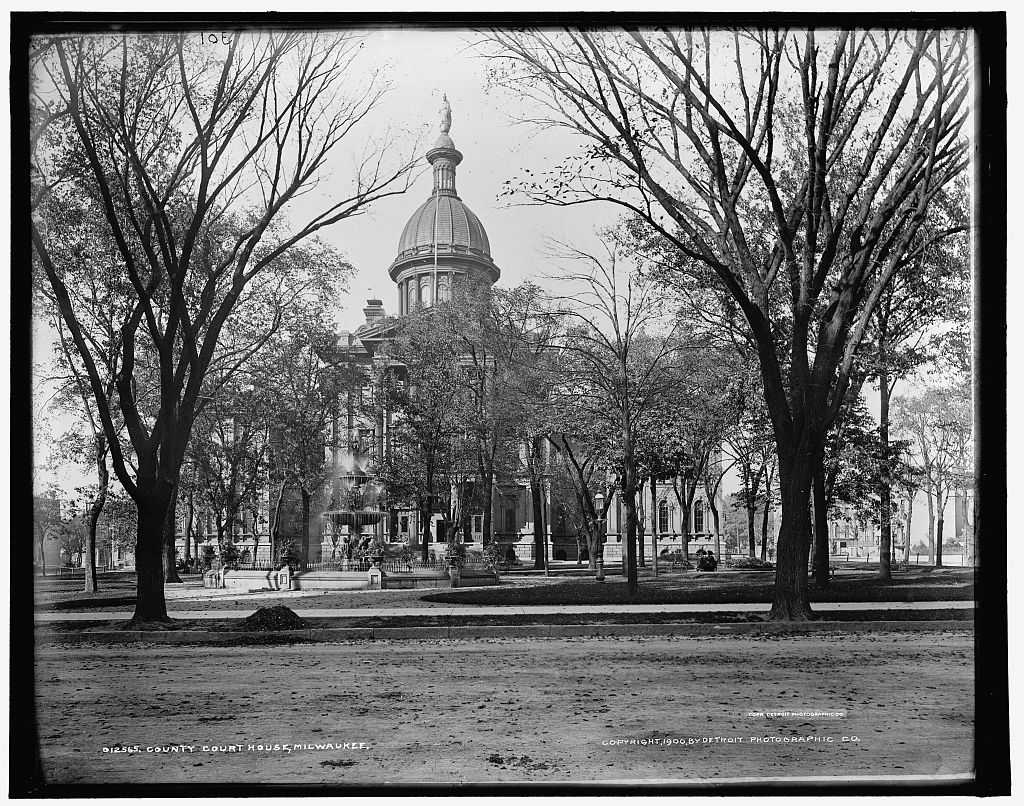 Historically courthouses were places for resolving legal and political matters. As community social spaces, they also demonstrated civic pride, serving as symbols of the ideal of American justice. As such the architecture of courthouses reflected their important role in community life. However, over time, courthouses, and later “justice centers,” became more specialized. Modern courthouses tend to be utilitarian and speak to efficiency and accessibility rather than represent symbols of justice and serve as examples of architectural grandeur. The courthouses of the greater Milwaukee area reflect these themes.[1]

The first Milwaukee County courthouse was built in 1836 on a reserve of public land bounded by what are now Kilbourn, Wells, Jackson, and Jefferson Streets. The Greek-Revival style courthouse was a two-story frame structure with a courtroom on the upper floor and four jury rooms on the first floor. The front had a pediment that extended nine feet and was supported by four Tuscan columns. Solomon Juneau and his partner Morgan L. Martin built the courthouse at a cost of $5,000 and donated the jail building. County offices were located in adjoining buildings built in 1843 and enlarged in 1846. The courthouse and jail building were razed and replaced in 1870.[2]

L. A. Schmidtner designed the second courthouse, built for $675,000 in 1873 in Juneau (now Cathedral) Square, the site of the first courthouse. The Roman Revival building was made of Milwaukee hydraulic brick, faced with Lake Superior red sandstone, and had Corinthian columns on its facades. The wings had two stories and the center had three floors plus a 175-foot high center dome. An imposing stone bust of Solomon Juneau was installed on the top floor of the courthouse, and a statue called The Golden Justice stood atop the building. The building was razed in 1939; Cathedral Square is now a Milwaukee County park.[3]

As early as 1909, plans were devised for a new county government complex, but it was not until 1929 that New York architect Albert Randolph Ross won a national competition to design a new courthouse. The structure, located at 901 North Ninth Street, was a neoclassical Indiana limestone building featuring a Roman-Corinthian colonnade on a plain base and classical Roman elements, including sculptured owls, fasces, and other traditional emblems. Renowned architect Frank Lloyd Wright criticized the imposing building as being fifty years behind the times, but it was a point of community pride and remains in use.[4]

The Federal Building and Post Office was Milwaukee’s Richardson Romanesque courthouse. Completed in 1899, the Maine granite building has an arched north portico with Romanesque carvings. Originally the Post Office occupied the first floor, federal courts the third floor, and the other floors provided space for Customs and Internal Revenue Service offices. A less ornamental and more utilitarian addition to the Federal Building was built in 1931. From 1989 to 1996, a major renovation and restoration project took place, restoring the historic interiors to their original brilliance.[5]

The first Ozaukee County courthouse was built in 1854 in the county seat of Port Washington at a cost of $12,000. It was a brick three-story building, with the jail and jailer’s quarters on the first floor, offices on the second, and the courtroom on the third. An adjacent 1867 building housed county offices. The first courthouse did duty until it was determined to be unsafe in 1899.

Officials debated prices and location for the new courthouse, but it remained in Port Washington. The new courthouse, designed by Fred Graf and built by Wurthmann and Vollmar, was completed in 1902 for $58,000. The Romanesque building had a large courtroom on the second floor and plenty of space for county offices. However, by the late 1950s the county had outgrown the courthouse. In 1969 an annex between the courthouse and the county jail was completed. In 1991 a Justice Center housing the jail, sheriff, other related offices, and courts was built on the edge of town. At the time the old courthouse and annex were remodeled and updated for continued use.[6]

Washington County was created in 1853 with West Bend as the county seat. In 1854 a Greek Revival frame courthouse, jail, and jailer’s residence were completed. In 1857 a one-story stone building was built to house county offices. As the original buildings were deteriorating, Edward Koch designed a new jail in 1885 and the new courthouse in 1889. The stone and brick building is a fine example of Romanesque Revival architecture with towers and turrets, terra cotta ornaments, and a round arch. The original courthouse was moved and replaced with a building that became the courthouse annex.

The 1889 building served as the courthouse until 1962, when it was remodeled to house other county offices. The current courthouse was built in 1962, with an addition in 1980. By the early 1990s all county offices were moved to the 1962 courthouse and a separate law enforcement building. The 1889 building was renovated and now houses the Washington County Historical Society and the Old Courthouse Museum.[7]

When Waukesha County split from Milwaukee County in 1846, Prairieville (now Waukesha) was named the county seat. The first courthouse, a two-story Greek Revival building, was built in 1849. A new jail was built in 1885. To replace the old courthouse, Milwaukee architects Rau and Kirsch designed a Richardson Romanesque building with turrets and a 130-foot tower topped by a seven-foot clock and a statue of the goddess of justice. Completed in 1893, the new building had three-foot thick granite walls faced with local Lannon stone, curved Roman arches, and oak woodwork. It was built on several Native American effigy mounds, including a 250-foot long turtle mound. In 1938 a new annex connected the courthouse to the 1885 jail building.[8]

In 1959 a modern three-story glass, brick, and concrete courthouse was built nearby. In 1989 a justice center completed the Waukesha County Government Complex. However, the 1893 courthouse building continued to be useful. The Waukesha County Historical Society Museum opened in the old courthouse in 1914. When the county offices moved to the new courthouse in 1959, the museum shared the building with the Southeastern Wisconsin Regional Planning Commission. In 2002 the Historical Society purchased the entire building complex from the county for one dollar. In 2015 plans were announced to redevelop the old courthouse complex for mixed-use purposes.[9]

Flanders, Steven, ed. Celebrating the Courthouse: A Guide for Architects, Their Clients, and the Public. New York, NY: W.W. Norton, 2006. 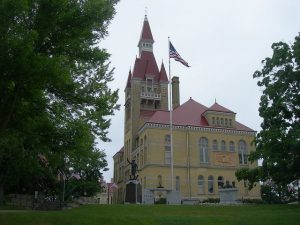 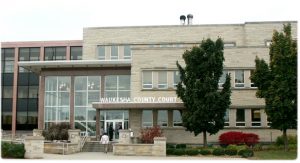 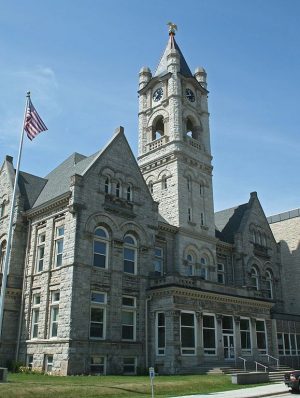