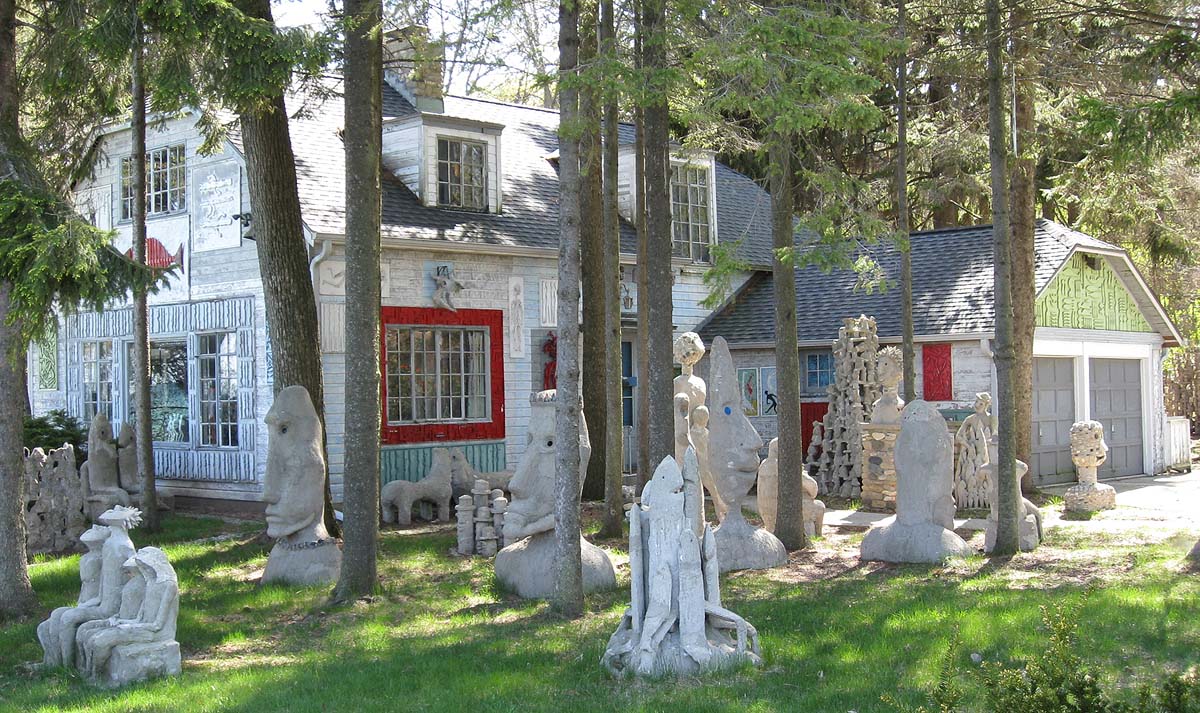 Mary Louise Nohl was one of the most important local artists in Milwaukee’s history. Nohl was born in Milwaukee on September 6, 1914, to Leo and Emma Nohl.[1] She showed her creativity from an early age by building small structures with discarded materials—including old toys and clothes—that other people considered junk. She also participated in other creative acts, such as making dolls and puppets to use in puppet theater performances.[2] In 1933 Nohl enrolled at Rollins College in Winter Park, Florida, at the age of eighteen. While there, Nohl joined the art club and took drawing, painting, and sculpture classes.[3] However, after a year, Nohl felt that the school would not help her pursue her artistic ambitions. To remedy this, Nohl transferred to the School of the Art Institute of Chicago in 1934. She graduated in 1939 with a focus on pottery, sculpture, and painting.[4]

After college, Nohl’s first job was as an art teacher for the Baltimore (Maryland) County Public School District. She taught roughly thirty classes a week, with forty students to a class.[5] Nohl resigned in March 1941 and moved back to Milwaukee, where she lived with her parents. However, upon returning to Milwaukee, Nohl began teaching again—first at North Division High School and then at Steuben Middle School.[6] In 1948, Nohl’s family moved to a home on Beach Drive, on the shore of Lake Michigan in Fox Point, which Leo and Emma had bought as a summer home when Mary was ten.[7]

Between 1960 and 1968, Nohl’s brother Max and her father and mother all died. Mary inherited the Fox Point house and a considerable amount of money, which allowed her to focus solely on art.[8] Nohl made alterations to their home by painting appliances and designing unique furniture. Nohl also began to put up unique sculptures throughout her house with wildly different color combinations, creating an eccentric aesthetic.[9] The most dramatic additions Nohl made to the property, however, occurred outside, where she began making dozens of sculptures, primarily out of wood, stone, and concrete. The sculptures resembled animals, Easter Island stone heads, and people.[10]

Over the next thirty years, the number of pieces of art in Nohl’s yard and home grew considerably, as did the public’s awareness of her idiosyncratic art. Some people began to call her home the “Witch’s House,” due to Nohl’s reclusiveness and her odd sculptures. However, Nohl’s home and artistic style also attracted a large amount of positive attention from Milwaukee residents and artists.[11]

Nohl died on December 22, 2001.[12] Nohl’s home has been preserved since her passing by the Kohler Foundation, although there was initial concern by neighbors who feared increased traffic in the secluded neighborhood.[13] She also left her considerable fortune of $11.3 million to the Greater Milwaukee Foundation, whose Mary Nohl Fund now provides arts supplies for youth throughout the area.[14]

Manger, Barbara, and Janine Smith. Mary Nohl: Inside and Outside, A Biography. Milwaukee: Greater Milwaukee Foundation, 2008.