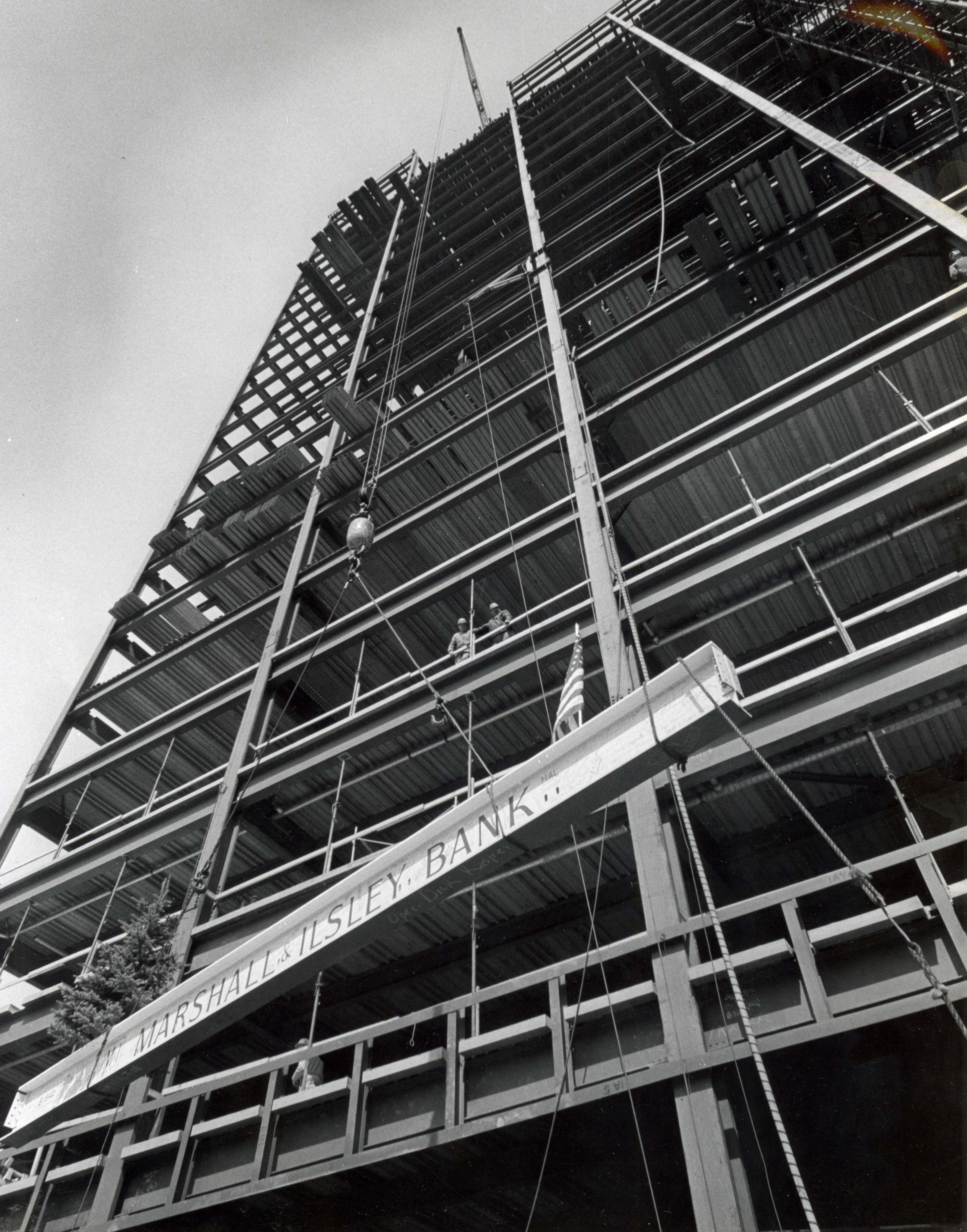 Founded in 1847, Marshall & Ilsley Bank, or M&I, was Milwaukee’s oldest and largest bank before being acquired by Toronto-based BMO Harris Bank in 2011.[1] At the time of acquisition, M&I had $49.6 billion in assets, making it the largest Wisconsin-based bank.[2] From headquarters at 770 North Water Street, the bank employed 9,100 people, nearly half of them in Southeastern Wisconsin.[3] Although the M&I name no longer exists, nearly 200 BMO Harris branches operate in Wisconsin.[4] In 2015, BMO Harris was the second largest deposit holder in Wisconsin, with over twelve percent of the state’s market share.[5]

In 1847, Samuel Marshall, a Pennsylvania native and devout Quaker, opened an exchange brokerage on Milwaukee’s East Water Street.[6] Wisconsin law prohibited the chartering of banks prior to 1852, but Marshall’s office offered many traditional banking services.[7] After a brief partnership with William J. Bell, Marshall joined with Charles F. Ilsley.[8] An experienced banker, Ilsley had worked for Alexander Mitchell’s Wisconsin Marine & Fire Insurance Company since 1847.[9] Together, Marshall and Ilsley guided their bank through various economic crises of the nineteenth century, including the Civil War. Trusted by the incumbent governor, M&I was chosen to distribute state financial benefits to returning Civil War soldiers.[10] Although the bank’s leaders were both Yankee-Yorkers, M&I offered services for Milwaukee’s growing immigrant communities, including foreign correspondence banking and German-language deposit books.[11] By the time it sought a state charter in 1888, Marshall & Ilsley was the largest private bank in Wisconsin.[12]

During the twentieth century, M&I expanded geographically. The bank’s first branch opened in 1906 in Walker’s Point, allowing the bank to increase its services to Milwaukee’s immigrant communities.[13] In order to overcome later government prohibitions of branch banking, M&I created a bank holding company in 1958.[14] Through a series of mergers from the 1950s to the 1980s, M&I’s holdings made it the largest Wisconsin-based bank.[15] When interstate banking became possible, the bank expanded to Arizona in 1986.[16]

M&I was an early adopter of computerized banking. The bank began processing its checks by computer in 1961, and by 1963 it offered these services to its correspondent banks.[17] M&I brought together four local banks in the creation of the TYME cash machine network in the 1970s.[18] The bank took a leading role in the automation of banking by developing its own computer software, which it began selling to competing banks in the 1980s.[19] In 2007, M&I spun off this data services division, renamed Metavante, for $4.25 billion.[20]

Not long after spinning off Metavante, M&I was hit by the 2008 financial crisis. The bank, which had substantial mortgage holdings in hard-hit Arizona, recorded over $2 billion in losses in 2008.[21] M&I began looking for buyers in 2010, and in 2011, Wisconsin’s largest in-state bank was absorbed into the Bank of Montreal’s American business.[22] Together with Chicago’s Harris Bank, M&I Bank was renamed BMO Harris.[23] Familiar M&I Bank signs throughout Wisconsin were replaced by BMO Harris signage in October 2012, finalizing the loss of an iconic Milwaukee name.[24]