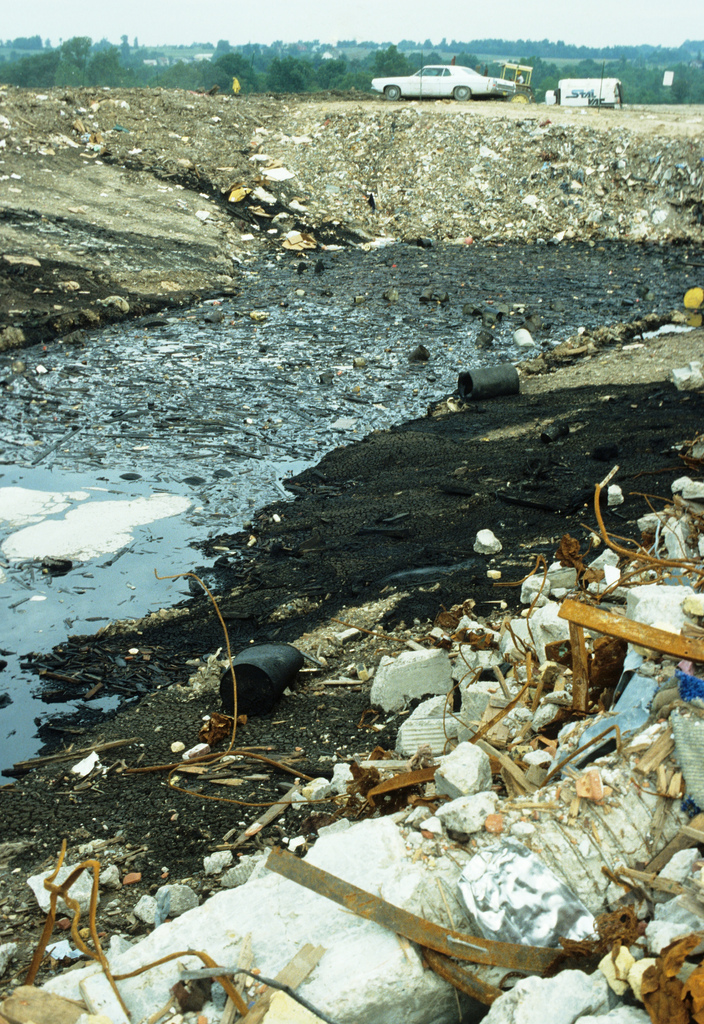 As in all communities, Milwaukee residents have always needed to dispose of the garbage they produced. One disposal method that transforms the metropolitan landscape is sanitary landfills—sites where garbage is dumped into trenches and covered with soil. At times the use of landfills brought the city of Milwaukee into conflict with both neighboring and distant municipalities.

Although accepted later, landfills were controversial in the Milwaukee area during the nineteenth century.[1] In 1875 the City of Milwaukee began contracting with private companies to dispose of residential waste. Most of this garbage was either used as hog feed, in “rendering” facilities where animal tissue was converted into tallow and grease products, or burned in incinerators.[2] During the 1880s and 1890s, officials in the towns of Greenfield and Wauwatosa, as well as the Town of Milwaukee, resisted emergency efforts to bury the City’s waste on area farms. Voicing concerns about perceived health risks, these towns used court injunctions, trials, a grand jury investigation, and local ordinances to block the construction of landfills.[3]

Milwaukee and surrounding areas steadily increased their use of landfills during the twentieth century. Beginning in 1902, Milwaukee used city-owned incinerators to dispose of waste. Over the next few decades, suburban communities—including Shorewood, South Milwaukee, Wauwatosa, West Allis, and Whitefish Bay—began to run their own incinerators.[4] But all of these municipalities used landfill disposal on an overflow basis.[5] Further, with the decline of the rendering industry in the early twentieth century, most of the area’s noncombustible waste and incinerator ashes ended up in municipal and private landfills outside of the city.[6] Suburbs without incinerators and private businesses (including hotels, restaurants, and stores) generally hired private waste haulers to dispose of garbage in area landfills.[7] Pressure from private haulers and local municipalities demanding more landfill space spurred the creation of a Milwaukee County “dump” in 1956. Located near the border of the cities of Greendale and Franklin, it was open to use by individual citizens, private haulers, and local governments.[8]

As its incinerators aged, Milwaukee faced a garbage crisis in the late 1960s. Proposals to haul all of Milwaukee County’s garbage by rail to landfills in western Wisconsin and Illinois were rejected. Efforts to create a county-wide waste disposal system, which would have included new incinerators operated by Milwaukee County, were halted in 1969 after legal challenges from several municipalities.[9] Finally, in late 1970, the city of Milwaukee contracted with Acme Disposal Service Corp. to dispose of its waste in area landfills.[10] By the 1980s most municipalities in Milwaukee County were using their own trucks to collect and transport garbage to landfills. Most of these were operated by Waste Management, Inc., a national waste disposal company that had experienced rapid growth over the previous decade by acquiring smaller companies, including Acme.[11] By 1985 Waste Management operated landfills in the Village of Germantown and the cities of Muskego and Franklin that together served up to 75% of the Milwaukee area’s communities.[12] One defunct landfill in Franklin has been repurposed as a ski hill.[13]

Licensed Solid Waste Landfills in the Greater Milwaukee Area as of 2014:[14]