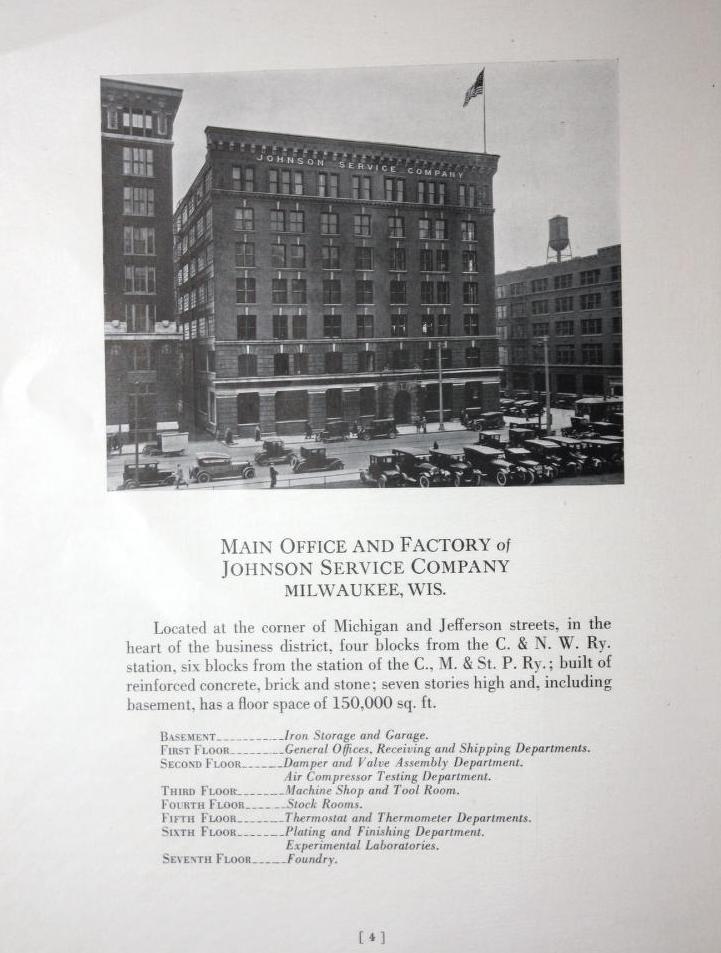 With operational headquarters in Glendale, Johnson Controls employs 150,000 people worldwide.[1] As of 2015, Johnson Controls remains the largest public company in Wisconsin, with $42.83 billion in revenue for fiscal year 2013-2014.[2] In three divisions, the company manufactures automotive batteries, automobile seats, and building climate and security control systems.[3] A 2016 merger with Tyco moved the joint company’s headquarters to Ireland, while the North American operational headquarters remained in the Greater Milwaukee area.[4] The automobile interiors business is scheduled to be spun off as a separate company in 2017.[5] Growing from its origin as a temperature control company to one of the world’s largest automotive suppliers, Johnson Controls has followed the industrial rise and post-industrial evolution of Milwaukee.

Johnson Controls’ journey began in 1883 when Warren Johnson patented his “Electric Tele-Thermoscope,” the first room-situated thermostat.[6] Two years later, the Johnson Electric Service Company was established as a partnership between Johnson and William Plankinton.[7] After operating in a variety of Milwaukee locations, the partnership established its headquarters and production on East Michigan Street (at a location that remains headquarters for Building Efficiency Operations).[8]

In its early years, the company—rechristened Johnson Service Company in 1902—dabbled in a variety of different businesses.[9] Johnson was an experimenter, and his innovations included a successful steam and gasoline automobile business.[10] In 1912, following Warren Johnson’s death, the company eliminated all products not related to temperature regulation.[11]

Despite this early consolidation, Johnson Service Company expanded once again in the second half of the twentieth century. The company instigated a variety of mergers in the 1960s and 1970s. A merger with competitor Penn Controls in 1968 brought Johnson Service Company into the Fortune 500 for the first time.[12] In 1978, the company (by then Johnson Controls, Inc.) merged with Glendale-based Globe-Union Inc., thereby becoming the United States’ leading producer of automotive batteries.[13] The corporate headquarters moved to Glendale, while a large portion of the company’s production remained in the greater Milwaukee area.[14]

From the 1980s to 2000s, both unionization and outsourcing increased across Johnson Controls. Although Milwaukee’s union labor force was more expensive than labor costs in Mexico, Johnson Controls returned a portion of its controls production to the Riverwest area of Milwaukee in 1991.[15] While the company advocated for the training and hiring of Milwaukee workers, it subsequently made an about-face and permanently closed the factory in 1996.[16] Despite a large administrative presence, Johnson Controls no longer has any manufacturing facilities in Milwaukee.[17]

As auto parts production increased, the United Auto Workers unionized many of the company’s American workers.[18] In the 1980s, United Auto Workers took Johnson Controls to court in what would become a foundational legal case on sex discrimination.[19] In 1991, the U.S. Supreme Court decided UAW v. Johnson Controls Inc. in favor of the union.[20] Johnson Controls had prohibited female employees capable of bearing children from obtaining jobs that involved high lead exposure.[21] The decision established that companies could not bar female employees from working in jobs that might damage fetal development.[22] 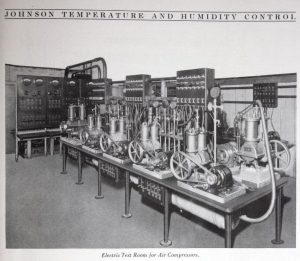 Writing History as It Happens: The Johnson Controls-Tyco Merger

When I am not writing for the Encyclopedia of Milwaukee, I spend a good amount of time working on my MA thesis. My thesis research centers on the Singer Sewing Machine Company’s Russian subsidiary, a business similar in some ways to the businesses I research for the Encyclopedia of Milwaukee. But, owing to the Russian Revolution, Singer’s Russian business was relegated to a dimly understood past in the history books. Many of the businesses in the Encyclopedia of Milwaukee, however, are continuing to thrive and evolve. This ongoing process of change can make writing about such a subject challenging. Constructing a narrative about Johnson Controls in early 2016 was particularly difficult, because the company was undergoing major changes at the same time I was researching and writing.

In January 2016, Johnson Controls announced plans to merge with Ireland-based Tyco. The merged company would be headquartered in Ireland, rather than in Milwaukee. Moreover, Johnson Controls planned to spin off a large portion of its business—the manufacturing of car interiors—in 2017.[1] In March 2016, I began researching Johnson Controls for the Encyclopedia of Milwaukee.

Needless to say, it was not difficult to find news stories about Johnson Controls. Wading through the outpouring of recent news coverage, however, presented its own challenges. Often for historians a year or two does not make much difference in the publication of sources. With Johnson Controls in 2016, however, I found myself in a similar situation as with Russian companies in 1917. A month or two could make all of the difference. Relatively recent sources quickly became dated. I had to supplement published corporate histories with brand new newspaper stories and press releases. Research is fundamentally a project of learning and discovery, but while researching Johnson Controls I had to keep abreast of daily news more than I have ever had to for the Encyclopedia.

Ever-changing headlines reflecting amendments to Johnson Controls’ corporate structure complicated the writing of this entry. How was I to integrate these changes into what I was called to write: a brief but thorough introduction to Johnson Controls’ Milwaukee history? Moreover, how could I ensure that the entry would be a useful resource going forward and not instantly dated? In the end, I decided to include references to the recent merger and upcoming divestments in the opening paragraph of the Johnson Controls encyclopedia entry, but to devote the majority of the text to the company’s history in Milwaukee. Since these mergers and divestments have yet to be realized, it was impossible to say much about their outcomes. Rather, I spoke of the plans as they sat in March and April 2016. Fundamentally, of course, the Encyclopedia is about Milwaukee. Johnson Controls’ origins and expansion in the Greater Milwaukee area seemed like the more important story. In the coming years, this merger and divestment may influence Johnson Controls’ future, but the company’s origins and past within Southeastern Wisconsin will remain. The effects of these ongoing changes on the company and on Milwaukee will await future scholarship. Perhaps one hundred years from now researchers will still be exploring Johnson Controls’ story just as I am still exploring Singer’s.[2]