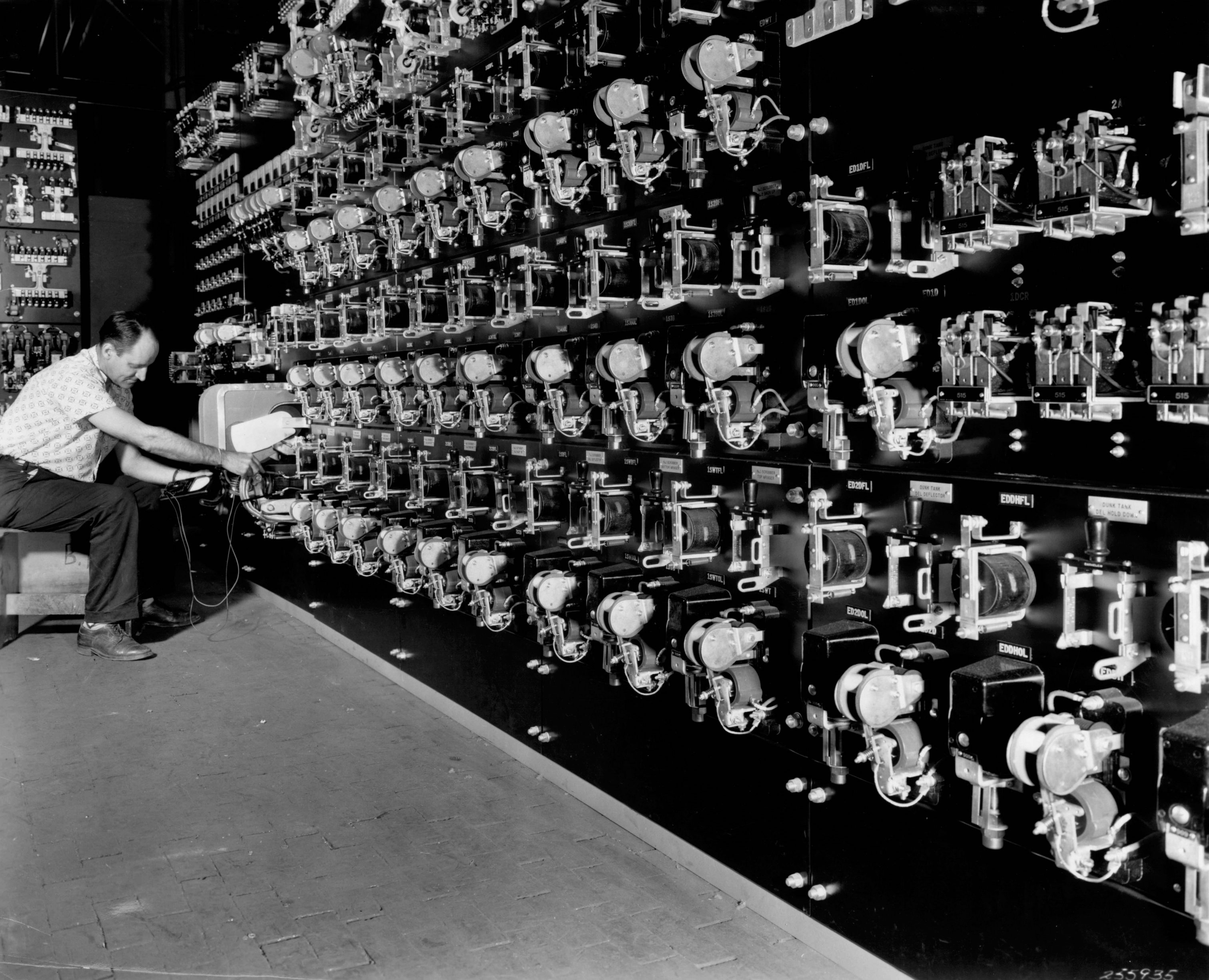 Originating in Chicago in 1892, Cutler-Hammer quickly relocated to Milwaukee and became one of the city’s leading business enterprises. Capitalizing on the broad use of electricity in the late nineteenth century, the company gained world renown for its electrical controls, devices that were used in everything from lamps to military aircrafts, submarines, and battleships. Like many Milwaukee corporations, Cutler-Hammer failed to maintain local ownership but has continued to have a presence within the city’s industrial community to the present day.

The firm came to Milwaukee in 1899, following a conflict over a patented starter box for motors.[1] The legal battle—with Milwaukee’s American Rheostat Company—ended in a partnership.[2] An economic depression made the 1890s particularly difficult for the young company, which nearly folded. As it bounced back late in the decade, Frank R. Bacon, its president, capitalized on his Milwaukee connections, situating the new business at the corner of St. Paul Avenue and 12th Street.[3]

To avoid future hardships, Bacon and the company’s namesake, Harry H. Cutler, made every effort to diversify production. Throughout the early 1900s, the company developed an automatic motor starter, elevator controls, a high-powered magnet designed for heavy lifting, and dimmers to eighty percent of New York and Chicago theaters.[4] They also bought a company that had patented an enameled resistor (essential for electric heating equipment) which opened a host of manufacturing opportunities.[5] The buildup of the American Navy following the Spanish-American War brought the company major contracts providing turning gears for turrets and electric rudder controls.[6]

As was the case for other industries, the subsequent outbreaks of two world wars proved a further boon to Cutler-Hammer. In addition to providing controls for naval vessels, the company developed rifle grenades for World War I.[7] Furthermore, it paired with four other Milwaukee companies to form the Wisconsin Gun Company, which manufactured 3-inch guns for that war effort.[8] When World War II broke out, the company shifted all its production to military goods, producing control devices for every branch of the military.[9] In peacetime, it sought to tap into the commercial uses of electronics in the burgeoning airline travel and space industries.[10] Cutler-Hammer also capitalized on the Marshall Plan, through which it gained footholds in Europe for exporting various electronics technology.[11] These successes led the original plant to expand steadily until 1963 when Milwaukee County needed a sizable portion of this property for a new freeway interchange.[12] By that time, additional plants had been opened at other Milwaukee locations.[13] Over time, the company grew to include fifty-four plants around the world.[14]

Ultimately, the company’s vast success on both a national and international stage led to the loss of its independence. The Eaton Corporation bought Cutler-Hammer in 1979. This takeover was far from hostile, however, and Cutler-Hammer retained its name and considerable control over its operations. It still retains the 30th St. facility as well as a handful of other Eaton manufacturing plants in the surrounding area.[15] Furthermore, Cutler-Hammer has an international presence. The company secured contracts abroad as early as 1906, and in the 1960s and 1970s it opened additional branches across the world.[16]