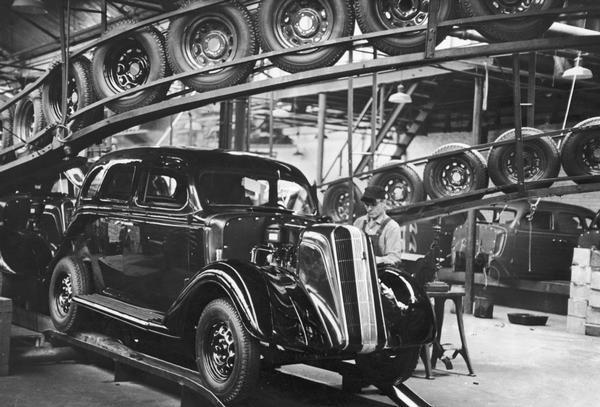 Founded as a furniture manufacturing company, the Seaman Body Corporation gained prominence as a maker of automotive bodies. For nearly seven decades, the Seaman Body factory at Capitol Drive and Richards Street on Milwaukee’s North Side produced bodies for the Nash and American Motors companies.[1] At its height in 1928, the factory employed 6,500 workers.[2] A family company that evolved with changing technology, the history of the Seaman Body Corporation follows the rise and fall of the independent automobile industry.

In 1847, Alonzo D. Seaman, a New York native, opened a furniture business in Milwaukee.[3] After an 1878 company bankruptcy, Alonzo Seaman’s sons went their separate ways, opening a variety of furniture-related businesses.[4] The most successful of these businesses belonged to William, Alonzo’s oldest son.[5] William Seaman used his furniture manufacturing knowledge to invent a soundproof telephone booth.[6] His W.S. Seaman Company contracted with the Western Electric Company to produce telephone booths and related equipment.[7] Owing to his success in the telephone business, Seaman built a new factory in 1906.[8] To fill the large factory, Seaman rented space to the Petrel Motor Car Company.[9] In 1909, Seaman began building wooden bodies for Petrel automobiles.[10]

W.S. Seaman Company built car bodies for many automakers in its early days, but soon Nash Motors became its chief client.[11] By 1919, Seaman was making all the “closed bodies” for Nash’s Kenosha firm.[12] That same year, George Nash bought a fifty percent interest in W.S. Seaman.[13] The W.S. Seaman Company reorganized as the Seaman Body Corporation, while William Seaman’s sons continued to run the company.[14] In 1936, Nash Motors acquired the rest of the Seaman Body Corporation.[15]

The decision of the Seaman family to sell their shares to Nash was driven in part by the labor unrest of the 1930s.[16] Prompted by layoffs and New Deal support for collective bargaining, workers at the Seaman Body plant joined with Nash workers in Racine and Kenosha for a seven-week strike in early 1934.[17] In solidarity, the workers refused to return to their jobs until each factory had implemented new agreements that include raises, seniority, and union recognition.[18] While the Nash factories in Racine and Kenosha closed down during the strike, Milwaukee’s Seaman Body factory continued to operate with strikebreakers and replacement labor.[19] Although the union eventually prevailed, the strike soured relations between management and workers.[20] Before the end of the decade, the Milwaukee factory experienced two additional strikes.[21] Labor relations continued to be strained after World War II, and the Seaman Body workers were the last of the company’s employees to sign contacts in 1955 and 1964.[22]

In 1954, Nash-Kelvinator and Hudson Motors merged to become American Motors.[23] While the merger brought the manufacture of Hudson and later Rambler bodies to the Seaman factory, the merged company was faltering by the late 1970s.[24] In 1979, French automaker Renault bought a large stake in American Motors.[25] Less than a decade later, American Motors was sold to Chrysler.[26] In 1988, Chrysler closed the Seaman Body factory and the Kenosha manufacturing plant.[27] 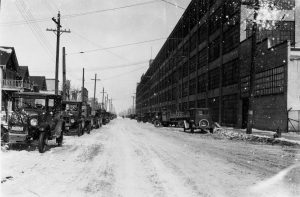