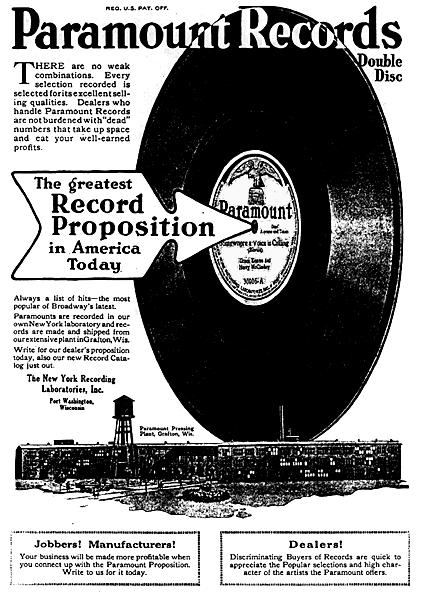 This local recording label strongly impacted the history of early blues music in the 1920s.[1] It was formed in 1917 by the New York Recording Laboratories—a subsidiary of the Wisconsin Chair Company located in Grafton.[2] The label’s first recording, “Wedding of the Winds,” was released on June 29, 1917 and was followed by recordings for ethnic audiences, including Germans, Scandinavians, and Mexicans.[3] After struggling to break into the market for popular music, the inexperienced executives at Paramount targeted the untapped African American audience by producing blues music, then known as “race records.”[4] In its brief lifetime, Paramount was responsible for producing approximately one-fourth of all blues recordings released.[5] Recordings took place in New York and Chicago until 1929, and records were pressed at the Grafton furniture factory.[6] New competitors, mismanagement, and the impact of the Great Depression on Paramount’s target audience led executives to scale back from 1929 until the company closed in 1932.[7] Paramount’s biggest stars included Ma Rainey, Blind Lemon Jefferson, Jelly Roll Morton, and Papa Charlie Jackson.[8]