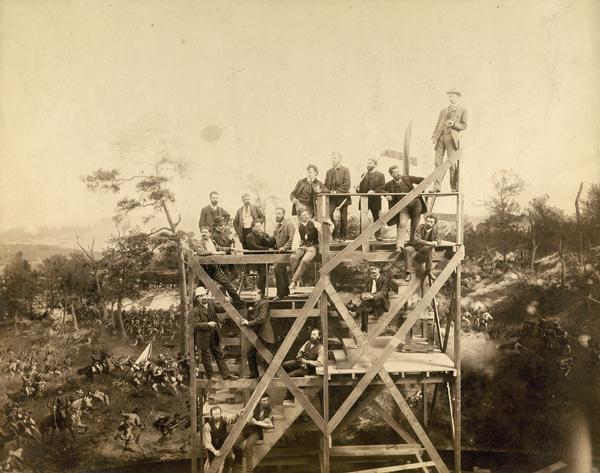 The production of panorama paintings—usually very large paintings hung in purpose-built rotundas—debuted in Scotland and London in the 1780s and 1790s.[1] The craze for such huge works, often of land or cityscapes, spread to the Continent and then to America.[2] Panoramas became one of the most popular forms of public art in the nineteenth century.[3]

Some of these paintings were not exhibited in the round but were scrolled out before an audience.[4] Milwaukee saw its first one in 1843.[5] Though public enthusiasm for these entertainments waned by mid-century, the 1870s witnessed a panorama revival,[6] spurred by patriotic visions of recent wars.[7]

Upon viewing a Franco-Prussian War panorama in New Orleans in 1884, William Wehner, a German immigrant entrepreneur from Chicago, envisioned a market in America for panoramas focusing on U.S. Civil War battles.[8]

Wehner began recruiting German-speaking panorama artists to create action-oriented canvases. Knowing these Europeans would feel most comfortable in German surroundings, he settled on Milwaukee as the site for his new workshop.[9] Artists were soon arriving from Dusseldorf and Munich, Berlin and Vienna.[10] Many had panorama experience as well as academic art backgrounds. Artists were hired for their expertise: landscapes, animals, figure painting.[11]

The site for Wehner’s new rotunda, or cyclorama, was on 6th and Wells St., in downtown Milwaukee. A smaller rotunda had been built a few months earlier a block north on Cedar St. (Kilbourn Ave.).[12]

The Northwestern Panorama Company on Cedar St. was operated by Louis Kindt and Thomas Gardner, two local theater scene painters.[13] They created and exhibited “The Battle of Vicksburg” at their rotunda and later produced versions of the Civil War battles Gettysburg and Shiloh.[14] Over the next four years Northwestern remained a minor league rival to Wehner’s larger, more finished canvases.[15]

To lead his new American Panorama Company, Wehner hired two accomplished German painters: Friedrich Heine and August Lohr.[16] Both supervised the eight panorama paintings that were produced in the Wells Street studio from 1885 to 1889.[17]

Wehner and his business partners, worried about competition in the United States and abroad, had to raise substantial capital to build the rotunda, pay the artists, purchase supplies, and transport the paintings.[18] An original panorama from conception to installation could take a year or more.[19] After that, profits could be reaped from exhibiting or selling the giant paintings. Milwaukee-made panoramas were soon making the rounds from Buffalo, New York, to San Francisco, California. At its height, a panorama might be viewed by thousands of people per day paying 50 cents each.[20]

The process of creating a panorama painting was complex. The erection of the wooden studio/exhibition rotunda came first.[21] Wehner’s building was typical: 60 feet high and 130 feet across, sheathed outside in corrugated iron.[22] Inside, two huge Belgian linen canvasses were stitched together and hung in the rotunda, stretching 385 feet around and 46 feet high.[23] A tram rail circled the canvas and four rolling scaffolds rose to its top, each with several platforms at different heights from which the artists worked. In the center, a darkened stairway led up to a public viewing platform, with a large opaque canopy hung from the ceiling, hiding the top edge of the canvas as well as the skylights and electric lamps that illuminated the painting from above.[24]

Before work could start on the panorama, housepainters primed the canvas with sizing. Several of the principal artists visited the locale they were depicting, often spending weeks on site sketching, photographing, and taking notes from battlefield veterans and locals.[25] Then a 1:10 scale model was prepared in the rotunda, with grid lines and roughly sketched scenes. The grids were then cut from the model, and enlargements projected onto the hanging canvas by means of a “magic lantern.”[27]

In the actual painting, palette knives were used to apply the oil paint, with brushes used for the most detailed work.[28] Accuracy was paramount, whether a horse’s gallop or a soldier’s buttons. Heine insisted on emphasizing the power of the battle, rather than the aggrandizement of generals.[29]

About twenty-five painters immigrated to Milwaukee to work on the panoramas.[32] Crews also numbered several local painters, including one woman, Amy Boos.[33] Several did outside work, including the murals that still adorn the walls of Turner Hall.[34] When not on the job, the painters often congregated at taverns with German-speaking actors and journalists.

Wehner’s first panorama was “Missionary Ridge,” finished in early 1886,[35] then “The Battle of Atlanta” the following year, succeeded by copies of each. These were followed by “Jerusalem on the Day of the Crucifixion,” with two more copies, and finally “Entry of Christ on Palm Sunday.”[36] By 1890 Milwaukee’s panorama painting came to a halt.

Some of the painters moved back to Germany (Lohr went to Mexico). Others stayed in Milwaukee, working as teachers, muralists, or portrait artists. Heine started a downtown art school.[37] Richard Lorenz became a distinguished painter of the American West and was an important mentor to the next generation of local artists.[38] Several panorama painters helped found the Society of Milwaukee Artists.[39]

Between 1885 and 1890 Milwaukee was a center for panoramic painting in America.[40] While Lindt and Gardner’s smaller panoramas were shown locally, the only Wells Street studio panorama to be exhibited in Milwaukee was “Christ Enters Jerusalem Palm Sunday.”[41] Although panorama painting in Milwaukee ceased by 1890, there were six operating cycloramas in Chicago when the Columbian Exposition opened in 1893.[42]

What became of these huge paintings? Many just disintegrated after heavy use. Some sections were used as theatrical backdrops, other parts sold off as individual paintings.[43] The sole remaining Milwaukee panorama is the second “Battle of Atlanta.” A $35 million restoration of the painting and the “cyclorama” in which it is housed began in 2016 in Atlanta, Georgia.[44]