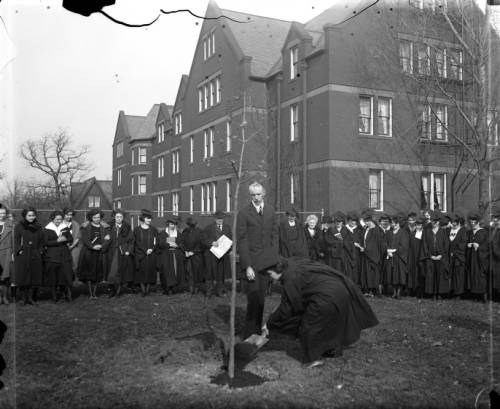 Milwaukee-Downer College and Seminary represent some of the earliest attempts at women’s education in Wisconsin.

Milwaukee Female Seminary, one of Milwaukee-Downer’s predecessor institutions, was founded in 1848 by Lucy Parsons, a progressive advocate for female education from New York. The school’s board of trustees drew representatives from Milwaukee’s prominent families, including Increase Lapham.[1] Parsons’ connections to East Coast progressive educators brought Catharine Beecher to Milwaukee in 1851. Under Beecher’s guidance, Milwaukee Female Seminary was officially incorporated as the Milwaukee Normal Institute and High School and organized on the Beecher Plan.[2] Funding was a constant struggle for the fledgling school, but school administrators raised enough to purchase land and open a dedicated school building in 1852. In the following year, the school took the name of Milwaukee Female College, becoming the first women’s college in the state.[3]

The Milwaukee College campus was not sufficient for the combined schools. In 1897, Milwaukee-Downer College broke ground on a ten-acre site on Milwaukee’s North Side, inaugurating two decades of growth under Sabin’s capable leadership.

Both Milwaukee and Downer Colleges offered preparatory courses over the years, and with the merger, Milwaukee-Downer Seminary became an official department of the college, offering a four-year preparatory course. By 1910, the Seminary became a separate institution, and in 1933 it incorporated as its own entity, although it continued to lease its buildings from the college.[7] The Seminary expanded in 1935 when it merged with Lake School to offer education for kindergarten through 12th grade.[8]

Both Milwaukee-Downer College and Seminary adapted to the changing needs for education during the first half of the twentieth century. College curriculum shifted from Greek and Latin to the sciences, education, and psychology. In response to World War One, the college added a nursing degree and launched one of the first occupational therapy programs in the country.[9] 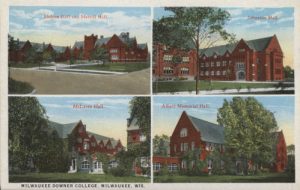