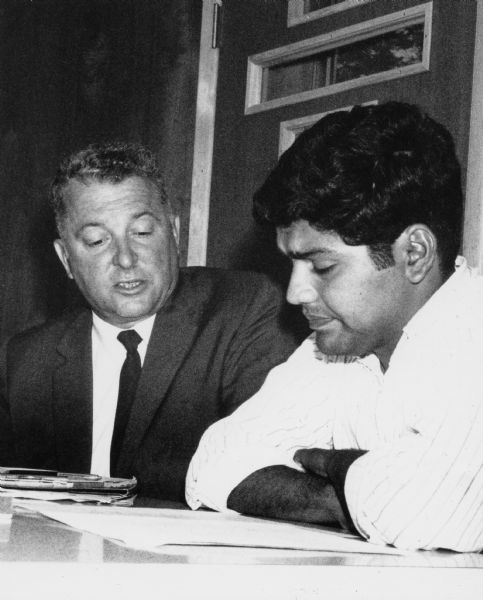 John W. Schmitt (b. February 3, 1920, in Milwaukee), as president of the Wisconsin State AFL-CIO (1966-86), is credited with strengthening the labor federation and its impact on state policy by building grassroots political action programs.[1] He grew up in the Depression; after army service during World War II, he worked in Milwaukee breweries, becoming active in Brewery Workers Local 9. His leadership in a 1953 strike tagged him for future leadership.[2]

Upon taking office in 1966, he pushed for and largely gained unity between the previously feuding skilled trades and industrial unions.[3] The State AFL-CIO expanded services to locals in industrial engineering, community involvement, stewards’ training, and officer education. He understood the need to expand labor’s horizons, supporting the 1960s migrant farmworker campaign in Wisconsin and creating a State AFL-CIO Women’s Committee in 1970, one of the nation’s first.[4]

Schmitt served on many community boards, including as president of Milwaukee’s Summerfest Board from 1977 to 1987. He resided in Milwaukee until his death on March 26, 2018.[5]

I’ve known John Schmitt (“Schmitty”) since 1962, when as a chief officer of the Wisconsin State AFL-CIO he led a group of other unionists to join our picket line at the Milwaukee Sentinel during a particularly critical moment. From that moment on, I was convinced that his main motivation was to serve the causes of working people and their families, even though many sometimes criticized him for being too conservative. To many he came across as a stereotypical old line labor leader; he smoked cigars, he was blunt and tough-sounding. Beneath all that bluster was a man with a keen mind who would appear to deny (in rough, crude tones) many progressive activities; yet, he would often take steps to ensure that they eventually went into effect.

He often seemed to discredit those with degrees, such as educators or lawyers; yet, he hired competent well-educated staffers to carry out the mission of the state AFL-CIO. He championed expanding the University of Wisconsin and education everywhere. He greeted the women unionists who pressed him to form a Women’s Committee in 1969 with little enthusiasm; yet, he went ahead with little delay to form what was reputed to be the first state AFL-CIO Women’s Committee in the country.

We traveled often together, since my job as political action director of my union found us at meetings throughout the country. He was great fun; my favorite memory is being in the Chase Hotel in St. Louis at the time Budweiser dealers were in the hotel for a convention. John ordered a Schlitz, to the horror of the bartender who had been told only to dispense Bud products during the convention. John got his Schlitz.

I visited John in a Milwaukee nursing home shortly before Christmas 2015. He would turn 96 in February, but his mind was sharp and his memories clear. Two broken hips make him wheelchair bound, but he’s still the same ol’ Schmitty.