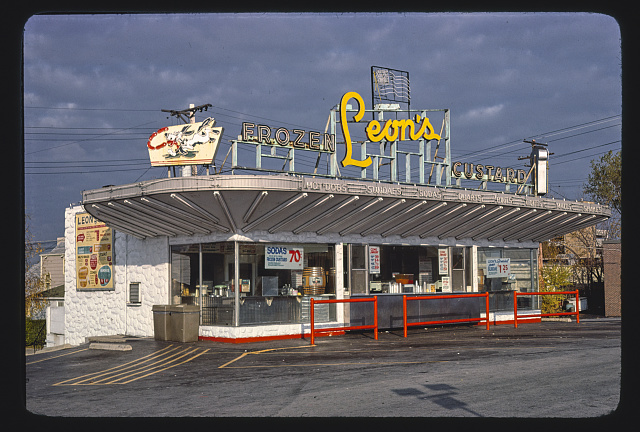 Frozen custard caused a sensation at the 1933 World’s Fair in Chicago. Although similar to ice cream, custard contains more cream and less milk, along with egg yolk and butterfat, which gives it a smoother texture and richer taste than ice cream.[1] Following the fair, Wisconsinites brought it north, opening custard stands in the greater Milwaukee area, and eventually making it the unofficial dessert for the dairy state of Wisconsin.[2] In the city of Milwaukee there are four landmark custard stands. Gilles, located at 76th Street and Bluemound Road, has served the Milwaukee community since 1938.[3] Its south side rival, Leon’s Frozen Custard, is located at 27th Street and Oklahoma Avenue. Leon’s opened its doors on May 1, 1942, and remains family-owned and operated.[4] Kopp’s Frozen Custard, whose headquarters is now at 76th Street and Layton Avenue, was founded in 1950 at 60th and Appleton and has opened two additional locations outside Milwaukee.[5] Finally, Kitt’s Frozen Custard at 70th and Capitol Drive has served north side residents since 1950.[6] While there are fewer custard stands outside Milwaukee, there are several suburban options that locals continue to visit: Oscar’s in West Allis, Pop’s Custard in Menomonee Falls, the Kiltie Drive-In in Oconomowoc, and Hefner’s Custard in Cedarburg, all of which feature a classic American menu of custard, hamburgers, hot dogs, and an assortment of fried foods.[7]

Hachten, Harva, and Terese Allen. The Flavor of Wisconsin: An Informal History of Food and Eating in the Badger State. 2nd ed. Madison, WI: State Historical Society of Wisconsin, 2009.