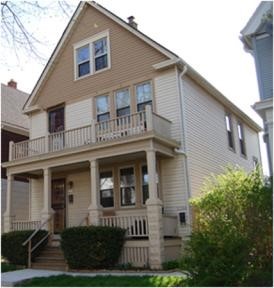 The duplex, an apartment house with two units, became a popular housing choice in Milwaukee during the late-nineteenth-century period of rapid industrial growth and residential development. By 1911, a study of Milwaukee conducted by the United Kingdom Board of Trade, described it as the city’s most common house-type.[1] Although a few are found in wealthier neighborhoods, the duplex is primarily associated with the working-class neighborhoods built between 1890 and 1930, where it served the housing needs of Milwaukee’s skilled industrial workers and their families particularly well. Assisting in meeting the demand for a rental housing stock, this semi-detached house form also allowed home-owners to earn income from renters or accommodate extended families.

There are many duplex configurations nationally, but the most common form of duplex in Milwaukee is the up-and-down arrangement or two-story “two-flat.” Most floor plans use the popular “bungalow plan”—that is, with a rectangular shape placed perpendicular to the street, its public rooms (living room, dining room, kitchen) lined up along one side and private rooms (bedroom, bathroom, bedroom) along the other.[2] This standard arrangement is completed with a wide porch in the front and enclosed staircase in the rear. Like the popular and contemporary single-family bungalow, it was equipped with new amenities for its working-class residents, including: kitchen facilities, dining room, three-fixture bath, private bedrooms, and closets. Given such features, it offered Milwaukeeans the comforts of a modern American house.[3] 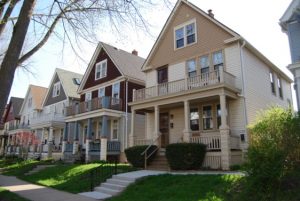