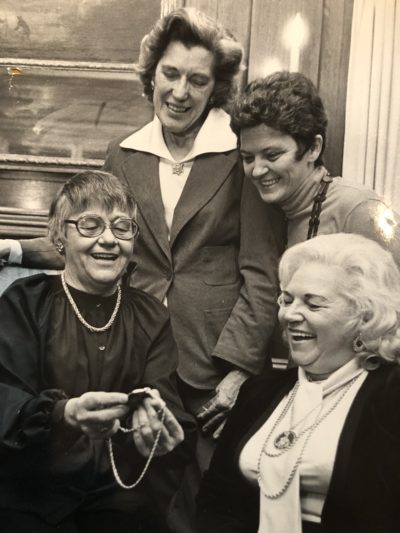 Catherine M. Conroy (1919-1989) was a prominent leader in the labor and feminist movements in Milwaukee.

Born in Milwaukee, Conroy worked as a cafeteria worker in a county tuberculosis sanitarium and County General Hospital after high school in 1938.[1] She was hired as a long-distance operator at Wisconsin Bell in 1942, later transferring to the company’s training department.[2] Conroy became active in the National Federation of Telephone Workers (NFTW) affiliate and was the picket captain during the union’s 1947 strike.[3] The NFTW showed itself to be an ineffective union in that strike and Conroy helped organize its successor, the Communications Workers of America (CWA). She was elected president of Milwaukee Local 5500 in 1951. She accepted a staff position with the national CWA in 1960.[4] She served on the Executive Board of the Milwaukee County Labor Council and was the first woman elected to the Executive Board of the Wisconsin State AFL-CIO in 1974.[5]

Conroy was a significant figure in the feminist movement after her appointment to the Wisconsin Governor’s Commission on the Status of Women in 1963.[6] She was a founding member of the National Organization for Women (NOW) in 1966 and helped establish the Chicago, Milwaukee, and Wisconsin chapters, serving as the Chicago chapter’s first president. She was honored as the Milwaukee chapter’s Woman of the Year in 1976.[7] She attended the founding convention of the Coalition of Labor Union Women (CLUW) in 1974, organized the Milwaukee chapter as its first president, and later served as vice-president of the state organization.[8] In 1979, Conroy was a founder of the Wisconsin Women’s Network. President Carter appointed her to the national Advisory Commission for Women in 1980.[9]

Conroy also served on the Wisconsin Department of Natural Resources Board from 1978-1979, the University of Wisconsin Board of Regents from 1983-1985, and the Higher Educational Aids Board in 1985.[10]