One of our goals at the Encyclopedia of Milwaukee is to illuminate the research process, so that readers learn about how historians know what we know.

In honor of Doors Open Milwaukee 2014, we offer this story from one of our Research Assistants, Catherine Jones, who went above and beyond the call of duty in researching the US Bank Center entry:

The StairMaster did not prepare me for this! My legs feel like they’re made of lead, my lungs are burning, and my heart is pounding harder than I knew it could. “12 more floors,” I manage to wheeze in the general vicinity of a friend I somehow convinced to partake in the American Lung Association’s Fight for Air stair climb at the U.S. Bank Center. And so we found ourselves, on a Saturday morning and of our own free will, having run up 35 floors of the U.S. Bank Center, with 12 torturous flights to go.* When we staggered to the top a few minutes later we were greeted with a medal, a water bottle, and the best view of Milwaukee either of us had ever seen. We took our time making a slow lap around the observation deck, pointing out where we grew up, where we lived now, and various city landmarks. We stood for a while, just wiping away the windows’ condensation and soaking in the enormity of Lake Michigan from 601 feet above the ground. When the next wave of climbers started to arrive, we crowded into an elevator with a team of local firefighters (who completed the climb in full gear and seemed ready to do it again) and rode, gratefully, down to the lobby. 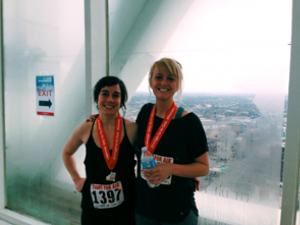 Condensation from sweaty climbers interfered with the view but not the sense of triumph.

*The race starts in the basement, so participants run up more than the buildings 42 above-ground stories. This climb occurred on March 22, 2014.